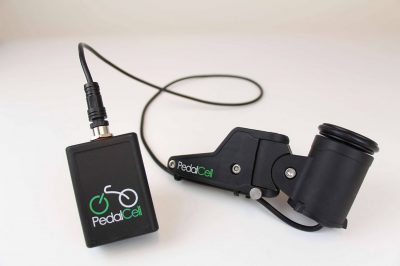 Chicago, Illinois (June 22nd, 2021) Startup PedalCell, based in Chicago, IL, is rushing to create more inventory after a spring demand surge. Founded by three engineer cyclists, their patented USB device charger generates power from a cyclist’s motion and started shipping in October 2020. PedalCell can charge USB devices such as smartphones, lights, GPS, fitness trackers, and action cameras with near negligible drag. Unlike bicycle dynamo generators made in the past for low-energy lights, PedalCell provides the power and intelligent circuitry needed to charge modern USB devices.

PedalCell’s charger trounces alternatives in power output and efficiency, containing 2-3X the charging performance of any bicycle dynamo generator. Its riders are able to charge a 10,000 mAh battery in just 4 hours of cycling. In addition, the product contains 11 weather-resistant seals to operate in mud, rain, sleet, and snow. PedalCell has won 17 innovation awards, including the midwest’s largest hardware startup competition.

PedalCell has received glowing reviews from many respected bicyclists who’ve tested the device in grueling conditions. Acclaimed bikepacker and professional photographer Jakob Carlsen added the product to his bicycle rig to power his multi-week unsupported races,

Adam Hokin, PedalCell CEO, commented, “We were the first in two or three decades to engineer a bicycle power solution from the ground-up. Demand is climbing well above our projections thanks to our unique value proposition and the ongoing bike boom. Adventure cyclists are starting to see us as the go-to option to stay powered on long trips. Even riders in more urban areas value the convenience of not having to remember to charge up their devices before starting their ride.”