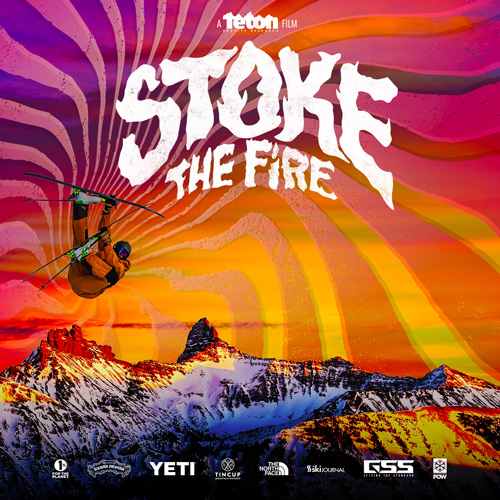 Directed by Steve Jones, Todd Jones and Jon Klaczkiewicz, Stoke the Fire features some of the world’s most celebrated freeskiers and snowboarders, and was filmed on location in various locations across the United States and Canada.

The new trailer for the film can be found on Teton Gravity Research’s website here, as well as on TGRtv, the company’s OTT streaming platform.

TGR also announced that Stoke the Fire will be touring around the world this fall, with the world premiere of the film slated to take place Sept. 18th in Teton Village, Wyo., as part of a community fundraiser event. A complete list of tour dates is available here, with more shows being added daily.

“Stoke the Fire is about that pure joy that comes from doing what we love – that internal fire that stems from exploring the mountains, challenging yourself and the creative expression that inspires us all” TGR co-founder Steve Jones said. “In addition to capturing the action that TGR has become known for over the years, this film showcases the personalities of the athletes and the lifestyle that is skiing and snowboarding.”

“After 26 years of making films, Steve and I both have that same passion that we did when we started TGR” added co-founder Todd Jones. “Working with an all-time roster of athletes that share that same level of excitement for the sport, bringing that to life in the film, and having a chance to share it with audiences around the globe at our premieres – that’s what it is all about.

“This past season was a dream getting to shred alongside Tim Durtschi and Kai Jones for the newest annual film, Stoke the Fire. The stoke was so high!” said Costain, a rising star in freeskiing who won the 2020 Kings and Queens of Corbet’s title in Jackson Hole. “I took the crew out to Cooke City, Montana and showed them around a few of my favorite sled skis zones. Everything from Pillow Stacks to mini AK lines and the fired up, neon jacketed, Minnesotan sled necks had the team on cloud nine. We wrangled together one of my favorite TGR segments to date!”

TGR’s 26th annual film release Stoke The Fire explores our athlete’s evolution within skiing and the pure joy that stems from that process. Stoke manifests itself in different ways – for many it comes from committing to a new world, a lifestyle, and the friendships that blossom from that commitment. The choice to enter this world is a spark, and with every new experience the fire grows. With more knowledge comes more exploration, both physically and mentally, that helps us to reignite and keep that stoke burning; to drive us to push further and further into our exploration with nature and the limits of our own abilities.

While the answers we find are different for everyone, the pursuit of this evolution is something sacred, that pursuit is what Stokes the Fire.

TGR founders Steve and Todd Jones will be available for media interviews to discuss the release of the film upon request.

Teton Gravity Research is regarded as one of the premier outdoor action, adventure, and exploration brands in the world. Known for original, custom and branded content. TGR’s world-class storytelling has captivated audiences for 25 years. With 40+  award-winning films, numerous television series, and national commercial spots TGR delivers a global, multi-channel footprint. Teton Gravity Research is one of the fastest-growing outdoor media brands with a thriving millennial audience, award-winning multimedia film projects, a rapidly growing experiential platform and unprecedented viral content. TGR is a proud member of the Surfrider Foundation, 1% For The Planet, BICEP, IMBA, and Protect Our Winters. For more information on TGR, visit TetonGravity.com.