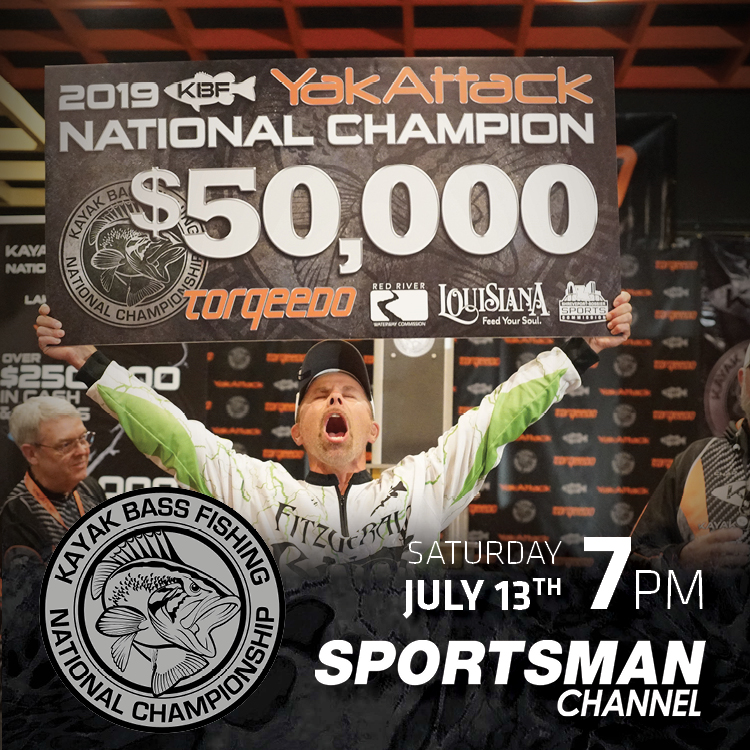 The YakAttack KBF National Championship presented by Torqueedo is an annual event that features the nation’s top kayak anglers and the sport’s up-and-coming talent. This year’s competition saw nearly 500 of the best kayak anglers from across the US and Canada descend upon Shreveport-Bossier City, Louisiana to compete for over $200,000 in prize money. Co-hosted by television star, YouTube personality and KBF president Chad Hoover, YouTube stars Scott Beutjer and Gene “the Flukemaster” Jensen, as well as KBF Creative Director Joe Haubenreich, the tournament was fast paced and competitive as over seven thousand fish were caught during the three-day competition.

“Competition amongst anglers, against the elements, the fish and themselves is fundamental to fishing. All of that was on display this spring at the YakAttack KBF National Championship Presented by Torqeedo, the biggest event in the world of kayak fishing,”said KBF President Chad Hoover. “The three-day tournament was held on the Red River and the five lakes surrounding Shreveport-Bossier City, Louisiana. Over 460 kayak anglers came to explore Louisiana’s bayous, lakes and backwaters. Anglers had to find their best 15 bass to earn the title of KBF National Champion and take home a check for $50,000 and their share of over $46,000 in KBF BONUS BUCKS.”

The KBF National Championship uses the revolutionary Catch, Photo, Release (CPR) online scoring format, whereby anglers photograph their bass on standardized measuring boards as they’re caught, and then upload the images to the event website. This not only allows fish to be released where they’re caught, but it provides spectators and competitors with a live leaderboard, from start to finish. The combined scores of up to five bass each day—15 in all—determines the final standings.

About Kayak Fishing with Chad Hoover: Chad Hoover loves to fish. So much so, he has little tolerance for those who don’t. His passion and talent for bass fishing, along with his dynamic personality and desire to share the sport of kayak fishing, has made Chad a leader of the worldwide kayak fishing movement. Chad is the host Kayak Bassin’ presented by Bonafide Kayaks which airs on WFN, the host of Knot Right Kayak Fishing presented by FishUSA which airs on Sportsman Channel, and is the charismatic online personality behind the Chad Hoover YouTube Channel, the Kayak Bass Fishing Facebook Page and the Kayak Bass Fishing Instagram account. Chad is also the founder and president of Kayak Bass Fishing – the nation’s foremost organization that engages, supports and informs kayak bass anglers. For more information, visit www.kayakbassfishing.com.

About Heliconia: Heliconia is an award-winning video production company that specializes in outdoor productions. For 21 years Heliconia has helped industry-leading brands, and some of the world’s top tourism authorities, communicate their marketing message in a unique, and inspiring way. Heliconia offers custom video production services and produces six unique television series which air on such networks as Sportsman Channel, FOX Sports, Outside TV, Nautical Channel, and World Fishing Network. Heliconia is also a leader in online video productions, with over 267,000 YouTube subscribers and 65 million views. See all Heliconia’s work at www.helipress.com