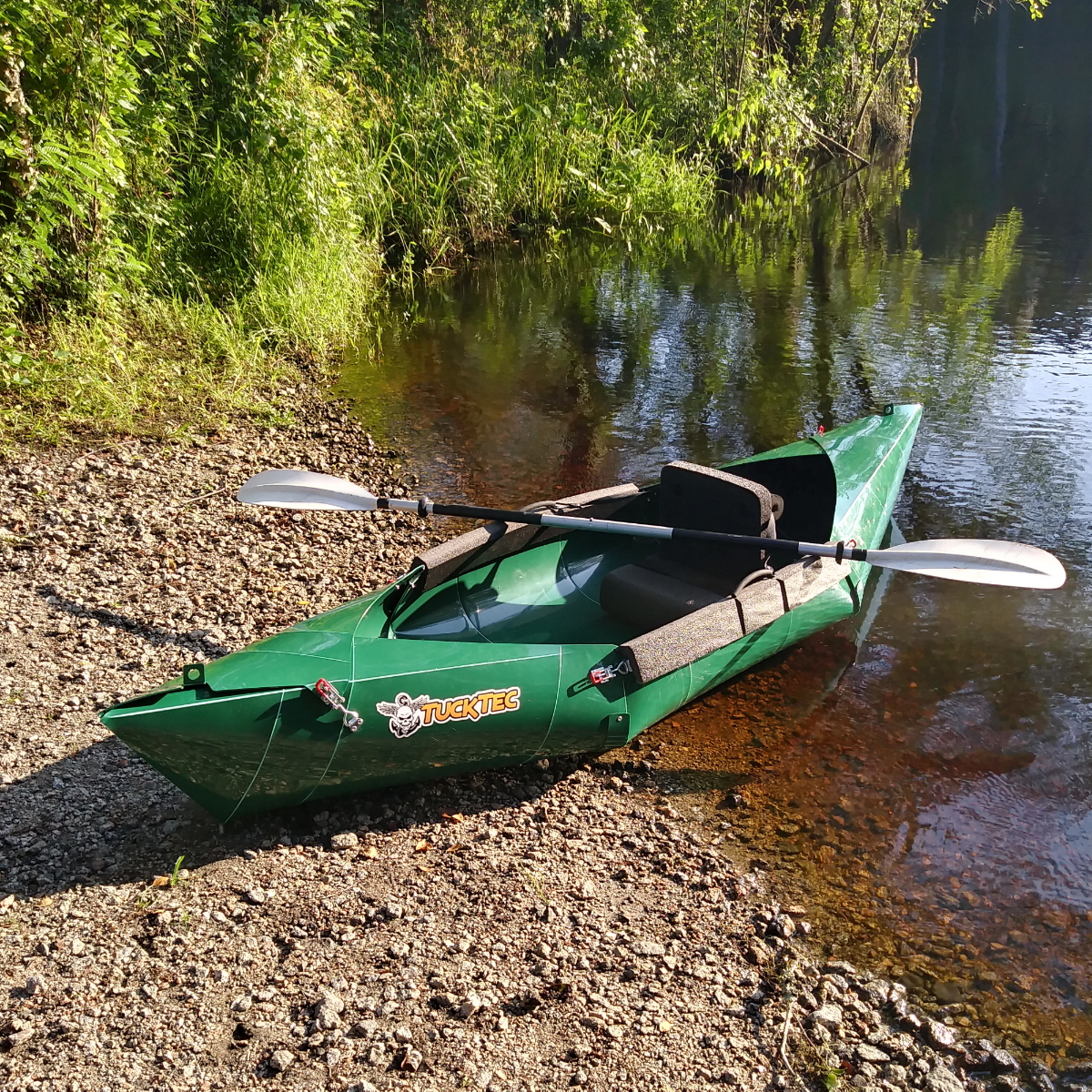 November 15th: Conway, South Carolina – You may not have heard of the Tucktec Folding Kayak, but if you’re lucky you’ve seen one in the wild.

In fact, since launching the revolutionary Kayak from his garage, inventor/owner Dan Norton says there’s been no real advertising done, they’re not sold in stores, word of mouth has driven the sky-rocketing sales that took them from making a dozen at a time in a garage to over a thousand sold in the past year. “We’re constantly getting calls from people standing by a lake or something, watching someone put it together and use it. And they just order one on the spot.” – Tucktec Owner Dan Norton

What makes the Tucktec Folding Kayak, and the family-owned company so unique is the unconventional approach to the design of the product and the business model. “We didn’t set out to create a portable version of an expensive kayak. We set out to create a solid hard-shell alternative to inflatables” says Dan. “We wanted to produce a product that anyone could buy and use, not just avid kayakers or folks with enough money to afford the limited selection of high priced portable kayaks available today.”

It started with a simple design concept. Instead of a portable kayak based on a skeleton or frame with a flimsy skin stretched over it, the Tucktec Folding Kayak starts with a single sheet of rigid and durable HDPE plastic folded in a pattern that leaves no open seams to seal or leak. The folds are secured in place with six heavy-duty toggle clamps making it quick and easy to set up. The technology is more like an exoskeleton. Using the strength and stiffness of the plastic itself without the need for an expensive frame or rail system. It also means it’s very lightweight. Weighing in at only 28 pounds the 10-foot kayak is extremely portable when folded, stores anywhere and even fits in the trunk of a car,  yet almost identical in performance on the water as a standard 10-foot kayak.

“We ended up with a Kayak that not only performed like a standard hard-shell kayak, was quicker and easier to set up than an inflatable, more durable than an inflatable, and that could be made at a fraction of the cost of traditional fold-up kayaks.” Dan commented and further adds, “This meant we did not have to sell this thing for a thousand or more, so regular folks like us without storage or a roof-rack can have a great portable kayak. You can have fun with it and beat up without worrying about it popping out on the water.”

The Tucktec Folding Kayak is sold only online from the company’s website, www.FoldupKayak.com.

Most sales come from people seeing someone put one together at a local lake or river. They always seem to draw a crowd and when a curious outdoor enthusiast goes to the website or calls the company they are almost always floored by the $300 to $400 price range. It’s no wonder this amazing personal watercraft is taking off! With a 90-day return policy and a 3-year warranty, it’s worth looking into.

What’s next for the Tucktec Folding Kayak and when is the best time to get one?

Tucktec loves feedback. Good or Bad. They’ve listened to their 1,000’s of customers and have constantly made improvements and upgrades to the kayak. The 2020 model is set to be released this holiday season with an improved high-back seat, greater tracking and stability, and easier assembly. With the boom in sales volume, Tucktec has been able to make these improvements without having to raise the retail price. Information about the new model and special holiday discounts will show up on their website before Black Friday.

Tucktec Ltd. Co. is a Family owned business in Conway, SC. It was started in the Garage of inventor/owner Dan Norton in the spring of 2018. Made in the USA, Tucktec uses local companies and suppliers to support their manufacturing of the Tucktec Folding Kayak. TuckTec.com is the manufacturer of the world’s only hard-shell foldable kayak. Currently, their products are only available online through their website www.FoldUpKayak.com.

For more information about anything included in this release or for press inquiries, please contact Dan Norton directly at 717-419-9214 or via email info@TuckTec.com

View all Releases by tucktec