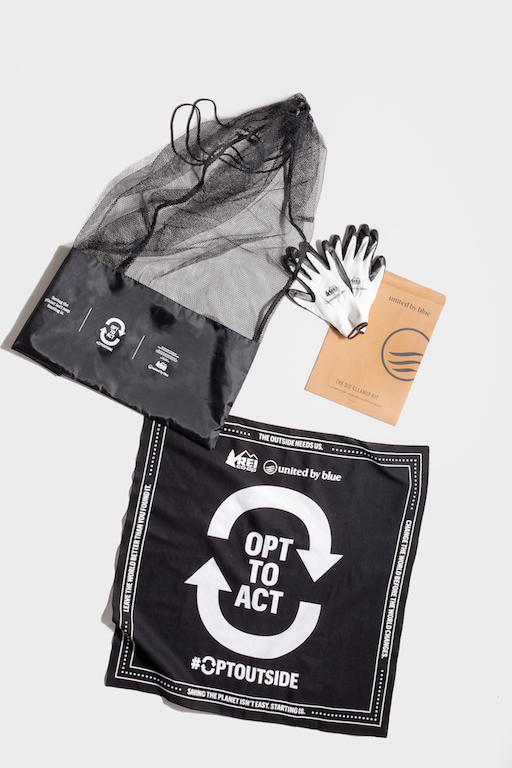 PHILADELPHIA, PA (October 23, 2019) – United By Blue (UBB) announced today it will partner with REI Co-op and #OptOutside this Black Friday. REI first launched #OptOutside in 2015, closing its stores and website and paying employees to spend the day outside with friends and family. This year, with partners like United By Blue, the co-op is inviting people to take it one step further, to “opt to act” on Black Friday by getting outside and doing a cleanup in their local communities.

Using United By Blue’s experience organizing and hosting waterway cleanups over the past decade, UBB has collaborated with REI to develop a DIY Cleanup Kit to encourage the public to take their action one step further. These limited edition cleanup kits will include a reusable mesh trash bag, gloves, and a bandana – all with the “Opt To Act” logo. The Opt To Act DIY Cleanup Kits are available for purchase at unitedbyblue.com/optoutside for $10.

“The goal of a DIY Cleanup Kit is to give our customers the tools they need to host a cleanup on their own. While it may seem simple, we’ve found that arming people with a pair of reusable gloves and mesh trash bag is the quickest way to inspire action,” says Brian Linton, United By Blue’s Founder & CEO.  “The Opt To Act DIY Cleanup KIt is made with the same reusable bags and gloves that we have been using at our cleanups for the past decade; the same tools that have enabled us to remove over 2 million pounds of trash from waterways are now available to anyone willing to get outside and make a difference in their own community. Complete with a limited-edition bandana to commemorate #OptOutside, we’ve designed everything in the kit to be washed and reused, over and over and over.”

In addition to the DIY Cleanup Kit, UBB and REI will be co-hosting 3 clean-ups as a part of the countdown to #OptOutside on Black Friday.The cleanup tour will cross the country starting in REI’s hometown of Seattle and making its way to UBB’s hometown of Philadelphia. The dates, times and locations are as follows:

United By Blue encourage you to join them along the way. Visit unitedbyblue.com/optoutside for more details and to sign-up.

United By Blue is a sustainable lifestyle brand driven by the belief that every living creature is united by the blue of our world’s oceans and waterways, and we all share the responsibility to protect them. Our pledge unites our beliefs with our business: For every product purchased, we remove one pound of trash from oceans and waterways through company-organized cleanups. All apparel and accessories are responsibly made using sustainable materials such as organic cotton, recycled polyester, and bison fiber. United By Blue products can be found in more than 1000 outlets nationally, in our stores in Philadelphia, and online at unitedbyblue.com.