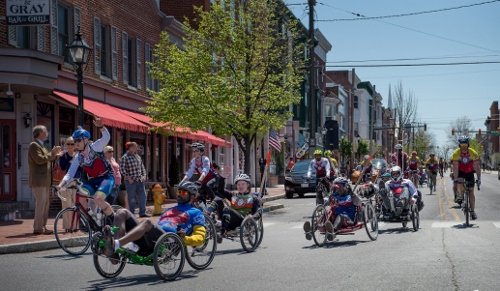 Arlington, Virginia – Two disabled military veterans – one from the United States, another from Canada – are featured in a new video about national non-profit World T.E.A.M. Sports’ Face of America bicycle and hand cycle ride to Gettysburg from Virginia videographer Kate Hoof.

A 24-year high school teacher, Hoof met both Cotts and Fredericks at the beginning of Face of America in Arlington. “She had such a compelling story that touched on the themes of overcoming adversity, perseverance and comradery,” Hoof said. “I heard these themes over and over again in the stories people told during the weekend.”

Cotts, a past participant of World T.E.A.M. Sports’ Adventure Team Challenge in Colorado’s high mountains and the organization’s 2014 CanAm Veterans’ Challenge bicycle ride from Ottawa to Washington, was happy to work with Hoof. He explained his participation in the Holbrook, New York-based non-profit’s challenging athletics literally saved his life. “Both Rachel and Michael were gracious to share their stories on camera and I hope I represented their experiences well,” Hoof said.

Traveling 110 miles in two days, Hoof kept up with Cotts and Fredericks by riding on the back of a motorcycle driven by professional photographer Tony Granta. “Tony has such a good eye and stopped at more scenic points along the route where I captured video and shot stills,” recalled Hoof. She noted that “All of the stills in the video were shot by Tony.”

Capturing the emotion, excitement and satisfaction of the ride and its participants, and then translating it into a compelling video documentary is a challenging task. From nearly five hours of video she took during the event, she used just under five minutes in the finished video.

“I spent about 40 hours editing,” Hoof said. “I watch everything over again and mark it. Editing is a recursive process, not a linear one. Regardless of the technology, it’s tedious and time consuming. The story unfolds slowly, but after a great deal of back and forth I fit the pieces together like a puzzle.”

Seeking out World T.E.A.M. Sports after a friend told her about the organization and its inclusive events that bring together disabled and able-bodied athletes, Hoof attended the November 2015 Adventure Team Challenge North Carolina in Charlotte. Through her footage of the Challenge, she created the official event video. She was invited back by the organization to document Face of America.

Documenting her first Face of America, Hoof was impressed and inspired by her experiences and interactions with riders during the two days to Gettysburg. “What stands out in my mind is seeing a line of two, three or four cyclists riding side by side, assisting each other up a tough hill. The visual was powerful and symbolized in many ways what the ride was all about.”

With her Face of America documentary complete, Hoof plans on spending time helping other non-profits tell their stories. In addition, she intends to “work on my 130-year-old house this summer.”