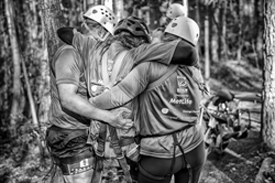 Eight teams of five athletes from ten states came together November 13-15 at the U.S. National Whitewater Center in Charlotte for the inaugural Adventure Team Challenge North Carolina. Created by national non-profit World T.E.A.M. Sports and presented by MetLife, each participating team included two athletes with disabilities, one being a wheelchair user.

Under sunny skies and warm mid-November temperatures, the athletes competed in a three-stage, two-day adventure race directed by experienced event directors Helene and Billy Mattison of Vail, Colorado. The Mattisons, who also direct World T.E.A.M. Sports’ annual Adventure Team Challenge in Colorado and a series of kids adventure races nationally, took advantage of the Center’s many outdoor attractions to create an invigorating athletic event that tested not only the physical skills of the participants, but also their ability to cooperate and overcome difficulties.

Teams negotiated off-road cycling, zip lines, rock climbs, obstacle courses, and white water rafting through Class II, III and IV rapids on the Center’s two man-made rivers. For many adaptive wheelchair athletes, the competition offered their first opportunity to get off pavement and into natural environments. Innovation and coordination was critical in successfully assisting these athletes through the back regions of the 700-acre white water park.

Team competition began on Friday afternoon after participants set up camp at the Center and completed short informational training sessions with event and Center personnel. The short prologue was the longest and most difficult in the history of the Adventure Team Challenge, which has been hosted annually in Colorado since 2007. The prologue provided athletes with a sample of the activities they would be undertaking in the next two days, and determined the starting times of each of the teams.

Saturday’s stage one began with a canopy tour on zip lines to the banks of the Catawba River. Here, teams transferred to water craft, including stand up paddle boards, to reach checkpoints along the shore. Teams then climbed onto mountain bikes and off-road hand cycles for travel through the extensive network of back country trails at the Center. Later, teams climbed onto rafts to descend one of the two man-made rivers.

For most participants, after dinner and a strategy session for Sunday’s stage, it was an early evening under starry skies. The following morning, athletes rose to a heavy frost and chilly temperatures. With the rising sun warming the countryside, teams began their second stage every few minutes. Off-road cycling, rock climbing, zip lines and the exceptional class IV rapids of the Center’s second man-made river occupied the athletes as they headed toward the finish line.

The Coagulators, the winning team at the Challenge, finished only three minutes faster than the second place team, Team 192. Overall, the eighth place Purple People Eaters team was less than 141 minutes behind the Coagulators in two days of competition.

The Challenge marked World T.E.A.M. Sports’ return to the Charlotte region, having been based in the city for its first 11 years. With the success of the inaugural North Carolina Challenge, and the strong support of local athletes, volunteers and sponsors, it is likely the non-profit will return in 2016 to host another Adventure Team Challenge.

About World T.E.A.M. Sports
World T.E.A.M. Sports is a 501(c)(3) not-for-profit organization chartered in North Carolina and headquartered in Holbrook, New York. Since 1993, World T.E.A.M. Sports has organized athletic events for disabled and able bodied citizens – mountain climbing, water sports, bicycling, and more. Our events change lives through sports by: (1) Building self-confidence and physical fitness for the disabled participants; (2) Participating disabled athletes provide a role model for other individuals with disabilities, encouraging them to take up physical activities; (3) The disabled become a moving inspiration to other participants and to spectators when they see that individuals with disabilities can meet challenges beyond anyone’s imagination; and (4) The disabled and able-bodied participants learn to work as a team to overcome physical, emotional and technical challenges.