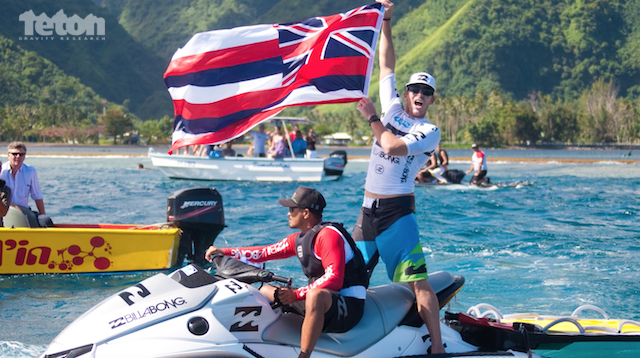 Andy Irons: Kissed By God is about bipolar disorder and opioid addiction as seen through the life of the surf-world icon.

(Dec 14, 2018) — Three-time world champion surfer Andy Irons struggled with the same demons that millions of people worldwide battle with daily. Andy Irons: Kissed By God is about bipolar disorder and opioid addiction as seen through the life of the surf-world icon.

The film recently won Best Documentary of 2018 by Surfer Magazine.

“Kissed by God is the most emotionally charged and intricate film I have ever directed with my brother Todd,” says Steve Jones, Founder and President at Teton Gravity Research. “I am honored to have earned the deepest level of trust with the Irons family, to finally deliver the uncensored story of Andy’s life. To receive this award on a film of such sensitive subject matter around one of surfing’s most prolific figures is a huge honor.”

The Surfer Awards are often called “the biggest night in surfing.”

“It’s the only event of its kind, where the entire surf industry gets together for one night to celebrate the best surfing and surf filmmaking of the year,” says Todd Prodanovich, Editor of Surfer Magazine. “This year was unique in that the Best Documentary category was the strongest it’s ever been, filled with some of the best surfing docs we’ve ever seen. For ‘Andy Irons: Kissed by God’ to win is a real triumph, but it also should come as no surprise to anyone who has seen the film. It’s a beautifully-told story about one of the most complex, dynamic, beloved and ultimately tragic figures surfing has ever had. ‘Andy Irons: Kissed by God’ was a film that the surf community truly needed.”

Teton Gravity Research is regarded as one of the premiere lifestyle and action sports brand in the world. Known for original, custom and branded content. TGR’s world-class storytelling has captivated audiences for more than 21 years. With 39 award-winning films, numerous television series, and national commercial spots TGR delivers a global, multi-channel footprint. Teton Gravity Research is one of the fastest growing media brands with a thriving millennial audience, award-winning multimedia film projects, a rapidly growing experiential platform and unprecedented viral content. TGR is a proud member of the Surfrider Foundation, 1% For The Planet, BICEP, IMBA, and Protect Our Winters. For more information on TGR, visit TetonGravity.com.