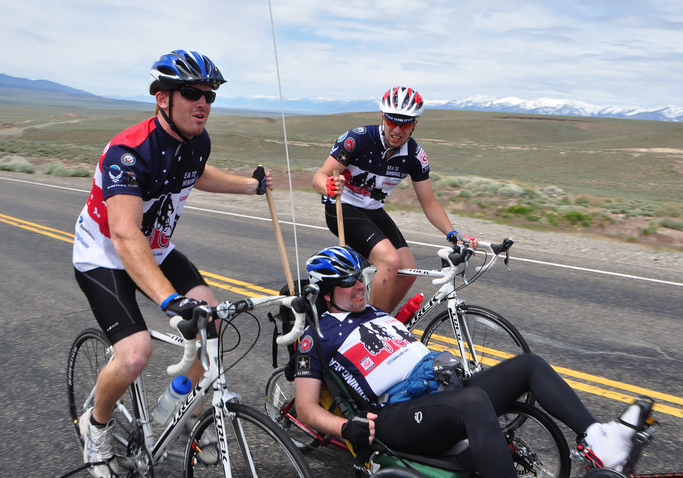 Bicycle Ride to Gettysburg to Include 180 Adaptive Athletes

Royse City, Texas – Retired Army Sgt. Clayton Rankin rode a borrowed recumbent bicycle 4,000 miles across the United States in the summer of 2010 as a member of national non-profit World T.E.A.M. Sports’ Sea to Shining Sea. Despite concerns from his colleagues as to his fitness and stamina, Sgt. Rankin successfully completed his journey. This April 28-30, he will ride his recumbent again in the organization’s inclusive Face of America bicycle ride to Gettysburg, a 110 mile ride from Arlington, Virginia that honors military veterans who were injured or disabled in their service.

Living with debilitating injuries he sustained while serving in both Gulf Wars, the married Denver, Colorado native had his own doubts when he traveled west to San Francisco in May 2010 for the start of the Sea to Shining Sea.  “I had struggled for more than six years in physical therapy that seemed to cause more pain than imaginable, with no foreseeable progress towards recovering my ability to walk unassisted,” Sgt. Rankin recalled. “I wondered if there was anything I could do to improve my physical condition, or if I would be confined to using wheelchairs and other mobility devices for the rest of my life.”

Noting that the Sea to Shining Sea came at a low point in his life, Sgt. Rankin looked deep into himself and found the “can do” spirit that military members have when it comes to facing challenges. “I decided I had nothing left to lose. I would either complete the ride, or die trying. It became an enemy stronghold that needed to be taken at any cost.”

Riding alongside experienced long distance cyclists like Ambassador Paul Bremer and retired Marine Corps General Robert Magnus, Sgt. Rankin began to cherish the doubts of his colleagues. As they kept anticipating his momentary departure from the cross-country ride, he grew stronger. Sgt. Rankin reports his successful completion as he reached the Atlantic Ocean in July 2010 was “a testament to all the American fighting men and women of the United States Armed Forces.”

Following his arrival in Virginia Beach, Sgt. Rankin was invited by the non-profit Saving America’s Mustangs to ride on their float in California’s Tournament of Roses Parade. “I was amazed that, even in California, almost all of the audience stood and saluted and thanked us for our military service as we passed.”

In April 2011, he rode Face of America to Gettysburg, alongside colleagues from the Sea to Shining Sea who no longer doubted his determination or fitness. “Participating in World T.E.A.M. Sports events has made me realize my new ‘normal’ can be an inspiration to others,” said Sgt. Rankin. “It has introduced me to a group of lifelong friends that are dealing with some of the same challenges I am. It has made me redouble my efforts to help our wounded veterans in any way I can.”

“My experiences participating in various sporting events have served as a constant reminder never to give up,” explained Sgt. Rankin. “It keeps me moving and keeps me focused on something other than my injuries. What I have lost in service to my country isn’t nearly as important as what I can still achieve by serving my country in the future.”

For military veterans who are considering participating in an outdoor sporting event such as Face of America, Sgt. Rankin has some advice. “Don’t let your injuries or disabilities stop you from being the person God made you to be. You have seen the worst humanity has to offer and survived. Participating in sporting events and activities is your welcome home.”