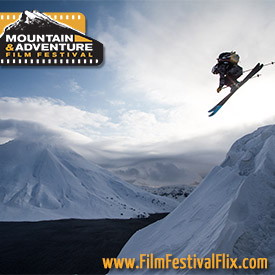 Attention Filmmakers and Outdoor Brands who make and/or sponsor films. Film Festival Flix is excited to announce that the call for submissions to the 2017 Mountain & Adventure Film Festival is now open. The festival will take place online from February 16th – March 19th, 2017. Pass holders will have 24 hour a day, on demand access to all the festival films during the festival period, ensuring they have a greater opportunity to watch and be inspired by all the films that interest them. They can watch the films on their computer, smart phone, tablet, or Internet connected TV and vote for their favorites.

Films may be submitted online at Film Festival Flix starting June 1st, 2016. Submission is FREE thanks to a sponsorship with MouseTrap Films, LLC, a Los Angeles based boutique film distributor. Selected finalists will be eligible to win $18,000 in cash prizes, as well as festival revenue sharing and distribution opportunities. Learn more about the prize categories and awards at Film Festival Flix.

Benjamin Oberman, President & CEO of Film Festival Flix stated, “I’m so excited to be entering our 3rd season with our amazing Athlete Ambassador Council and Non-Profit partners. Thanks to our growing audiences, this year we’ve expanded our prize categories and cash awards. The films get better each year and audiences are seeing more movies than ever before.”

Submit your films online at Film Festival Flix. The 2017 Finalists will be announced December 1st, 2016.