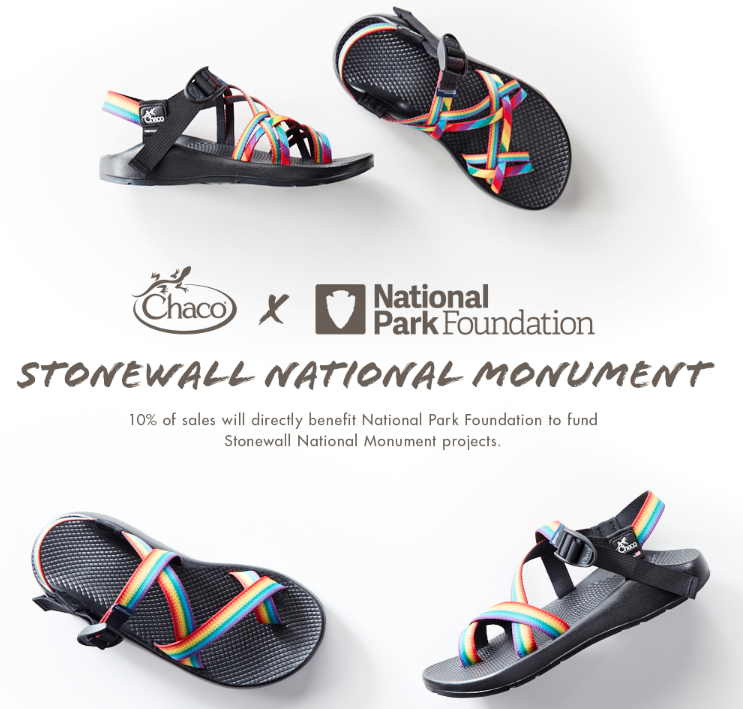 The Stonewall Inn is a bar located in Greenwich Village, New York City. In June 1969, the police raided the Inn, part of a larger, long-term pattern of LGBTQ harassment by New York City Police. Instead of dispersing, the crowd became increasingly defiant as the police arrested the bar’s employees and patrons. Reinforcements were called in by the police, and for several hours they tried to clear the streets while the crowd fought back. The initial raid and the riot that ensued led to six days of demonstrations and conflicts with law enforcement outside the bar, in nearby Christopher Park, and along neighboring streets. The events that month at the Stonewall Inn began the modern struggle for the civil rights of LGBTQ Americans.

The Chaco Stonewall Collection includes Women’s ZX/2 Classic and Men’s Z/2 Classic sandals with original strap designs inspired by the rainbow flag and the National Park Foundation logo. The sandals are Made in the USA, cost $130 per pair, and are available exclusively through Chacos.com. The collection launched on June 5, just in time to celebrate Pride Month.

About Chaco:
Born on the river in 1989, Chaco builds premium footwear for the outdoor-minded. As a result of the brand’s proprietary LUVSEAT™ footbed, the American Podiatric Medical Association (APMA) has awarded the Seal of Acceptance to all Chaco footwear styles. The APMA Seal is intended to raise awareness by identifying products of exceptional quality that are manufactured with comfort, health, and safety in mind. Simply put, Chaco is fit for adventure. Please visit us at www.chacos.com, Facebook: Chacos, Instagram: ChacoFootwear, Twitter: Chacousa.

Chaco is a part of Wolverine Worldwide’s Outdoor and Lifestyle Group.