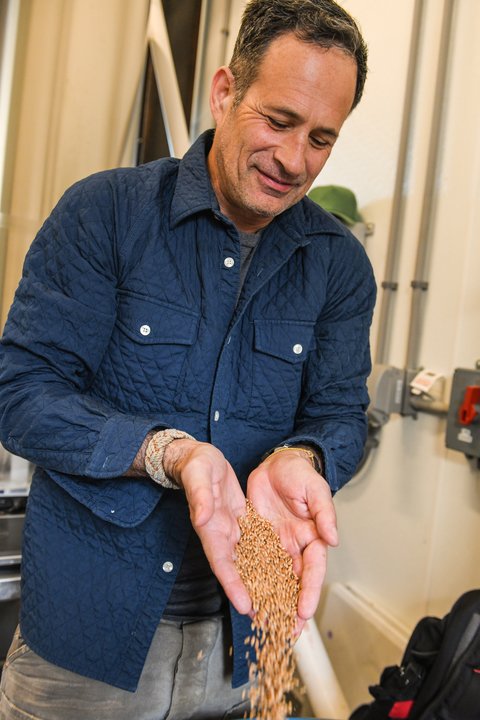 Rehoboth, Del., Wednesday, September 16, 2020 – Dogfish Head Craft Brewery joins forces with Indigo Agriculture to brew Re-Gen-Ale, the first traceably sourced beer to address climate change through agriculture using Indigo Carbon, a program that provides growers with a financial incentive to store carbon in their soils. Releasing on Saturday, September 19, from Dogfish Head Brewings & Eats in Rehoboth, Delaware, Re-Gen-Ale offers drinkers the opportunity to give back to the planet with every pint or can consumed, making it the perfect jumpstart to this year’s Climate Week (Sept. 21-27) festivities.

Dogfish Head’s unique partnership with Indigo, a company dedicated to harnessing nature to help farmers sustainably feed the planet, began back in January, when the first test batches of Re-Gen-Ale were brewed. Through Indigo’s Grain Marketplace, a platform used to connect growers and buyers of crops, Dogfish Head secured the traceably sourced ingredients to produce Re-Gen-Ale, including sustainable wheat grown with regenerative farming. Dogfish Head has also committed to purchasing more than the amount of carbon credits needed to offset the production of Re-Gen-Ale.

“Though this beer is just one small step toward developing more sustainable business practices, working with Indigo to brew Re-Gen-Ale has been a truly rewarding and thought-provoking experience,” said Sam Calagione, founder of Dogfish Head. “It’s shown us how thoughtful and sustainable choices, both big and small, can impact our environment. It has also taught us about new, nature-based solutions we can implement to reduce our carbon footprint and help combat climate change while brewing unique and delicious beers, like Re-Gen-Ale. We had originally planned to release this beer on Earth Day but decided to push the launch to celebrate Climate Week. It’s been a longtime coming, but I think I speak for all of us at Dogfish Head and Indigo when I say, we can’t wait to share Re-Gen-Ale with all you beer and nature lovers!”

“Agriculture has always wanted to do the right thing for the environment,” said Keesling. “By partnering with farmers to adopt practices that conserve our soil, water and environment, Dogfish Head and Indigo created a product that starts with protecting our valuable resources and ends with friends sharing a beer together. What’s not to love about that?”

In addition to thoughtfully sourcing Re-Gen-Ale’s ingredients, Dogfish Head will purchase more than the amount of carbon credits needed to offset the beer’s production. Purchasing these credits through Indigo allows Dogfish Head to help incentivize farmers to transition to regenerative growing practices that remove carbon dioxide from the atmosphere.

“With the brewing of Re-Gen-Ale, Dogfish Head has set a compelling example for brewers to consider the role of their suppliers – and agriculture more broadly – in the effort to address climate change,” said Noah Walker, Director of Carbon Product & Business Development at Indigo. “The partnership demonstrates that with the right tools, brands across the beer industry and beyond can efficiently unlock the potential of supply chains to address corporate sustainability and climate goals.”

Re-Gen-Ale will be available on draft and in 4pk/16oz cans at Dogfish Head Brewings & Eats in Rehoboth, starting Saturday, September 19. Packaged using bio-degradable, ocean-friendly beverage carriers from E6PR, each 4pk/16oz cans is priced at just $17. For more information about Dogfish Head’s partnership with Indigo or to learn more about Re-Gen-Ale, visit www.dogfish.com.

Dogfish Head has proudly been focused on brewing beers with culinary ingredients outside the Reinheitsgebot since the day it opened as the smallest American craft brewery nearly 25 years ago. Dogfish Head has grown into a top-20 craft brewery and has won numerous awards throughout the years, including Wine Enthusiast’s 2015 Brewery of the Year and the James Beard Foundation Award for 2017 Outstanding Wine, Spirits, or Beer Professional. It is a 350+ co-worker brand based in Delaware, with Dogfish Head Brewings & Eats, an off-centered brewpub, Chesapeake & Maine, a geographically-enamored seafood restaurant, Dogfish Inn, a beer-themed inn on the harbor, and Dogfish Head Craft Brewery, a production brewery and distillery featuring the Tasting Room & Kitchen and Dogfish Head Distilling Co. Dogfish Head supports the Independent Craft Brewing Seal, the definitive icon for American craft breweries to identify themselves to be independently-owned, and carries the torch of transparency, brewing innovation and the freedom of choice originally forged by brewing community pioneers. Dogfish Head currently sells beer in all 50 states and Washington D.C. For more information, visit www.dogfish.com, Facebook: @dogfishheadbeer, Twitter: @dogfishbeer, and Instagram: @dogfishhead.

Indigo improves grower profitability, environmental sustainability, and consumer health through the use of natural microbiology and digital technologies. The company’s scientific discoveries and digital platforms create new value from soil to sale, benefiting tens of thousands of growers across millions of acres. Working across the supply chain, Indigo is furthering its mission of harnessing nature to help farmers sustainably feed the planet. In 2019, Indigo established The Terraton Initiative, a global effort to draw down one trillion tons of atmospheric carbon dioxide through agricultural soils. Ranked #1 on CNBC’s Disruptor 50 list, Indigo is headquartered in Boston, MA, with additional offices in Memphis, TN; Research Triangle Park, NC; Buenos Aires, Argentina; São Paulo, Brazil; and Switzerland. For more information please visit our About Us page or follow us on Twitter and Instagram.