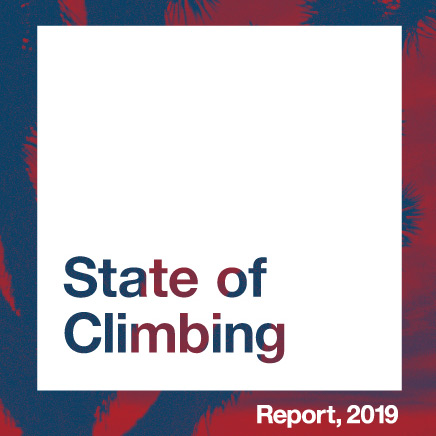 Golden, CO (July 9, 2019) — The American Alpine Club, in partnership with more than a dozen supporting organizations, is proud to release the first-ever State of Climbing Report, a comprehensive quantitative look at the American climbing community and its impact. The report details the growth, size, and demographics of the current community, and attempts to apply a yardstick to the community’s conservation efforts, economic impact, climbing-related accidents, and political advocacy.

The rising influence of the sport of climbing in the United States is undeniable; in 2018 nearly 4.4% of all Americans climbed indoors, a documentary about climbing won an Academy Award, and data shows a bright future with millions of millennials taking up the sport. Data also shows that climbing is relatively homogenous in demographic makeup—the majority of participants being white and male.

American Alpine Club CEO Phil Powers spoke to the effort to quantify climbing in America today: “We believe that collecting and distributing this information can lead to inspired action among industry leaders and beyond. If our strengths are exhibited, we can leverage them. If our weaknesses are revealed, let’s address them.”

Economically, the 2019 State of Climbing Report demonstrates that the climbing community is a force. It’s estimated that the sport contributed an estimated $12,450,000,000 to the economy in 2017, with the vast majority (87%) coming from trip- and travel-related expenditures. Due to the often-remote nature of outdoor climbing, many communities that benefit from climbing-related travel are rural, and the sport has significant economic impact in places like Lee County, KY; Lander, WY; and Sandrock, AL.

Download a free copy of the entire report at americanalpineclub.org/state-of-climbing-report

About the American Alpine Club

The American Alpine Club is a 501(c)(3) charitable organization whose vision is a united community of competent climbers and healthy climbing landscapes. Together with our members, the AAC advocates for American climbers domestically and around the world; provides grants and volunteer opportunities to protect and conserve the places we climb; hosts local and national climbing festivals and events; publishes two of the world’s most sought-after climbing annuals, the American Alpine Journal and Accidents in North American Climbing; cares for the world’s leading climbing library and country’s leading mountaineering museum; manages the Hueco Rock Ranch, New River Gorge Campground, Samuel F. Pryor Shawangunk Gateway Campground, and Grand Teton Climbers’ Ranch as part of a larger lodging network for climbers; and gives $100,000+ annually toward climbing, conservation, and research grants that fund adventurers who travel the world. Learn about additional programs and become a member at americanalpineclub.org