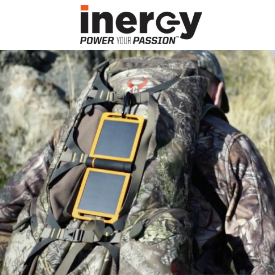 POCATELLO, ID – Coming on the heels of two hugely successful Indiegogo campaigns, the Home Base and Kodiak, Inergy, the company known for driving the progress of affordable solar energy technology, now looks to revolutionize the portable charger by launching a crowdfunding campaign on Indiegogo this upcoming Tuesday, November 15, at 9 AM PST for the Raptor Pro. The Raptor Pro represents the innovative focus of the company and the culmination of years of research and innovation: the world’s first solar powered quick charger. Inergy expects a similar response to the Raptor Pro as with its previous offering, the Kodiak, which now sits at over $760,000. Nearly everyone carries a smartphone and other USB powered devices with them today, and everyone needs to charge them. A simple question served as the starting point: how can we make the portable charger more useful? Make it solar and quick-charge capable.

“Inergy was created with one core goal in mind: to bring affordable solar energy solutions to the world at large,” said Inergy CEO, Sean Luangrath. “The Raptor Pro is our latest offering, and is the closest we’ve come to accomplishing our goal. What do the people of the world have in common? We are all united by our reliance on portable devices which often come in the form of the smart phone. Something few people know is how rapidly the technology has proliferated around the globe: for instance, in Africa, people commonly use cell phones for most of their financial transactions, as local banks are often an unavailable luxury. And all those devices need to be charged. The Raptor Pro is a revolutionary yet simple solution to this demand – anyone who can see the sun can now quick charge their device and sunlight is free.”

The Raptor Pro is as simple as it is revolutionary: it comes equipped with two Qualcomm Quick Charge enabled USB ports, cutting-edge Sun Power solar panels, and is light-weight and pocket sized for anyone to take anywhere.

“We wanted to create a product that anyone could throw into their bag to handle all their portable device power needs and concerns,” said Luangrath.  “Whether that person is heading into the jungles of Brazil, the frozen tundra of Alaska, pursuing humanitarian work far from a power grid, or simply getting away for the weekend, we have the answer.”

Qualcomm Quick Charge 2.0 enabled, the Raptor Pro incorporates a handful of extremely efficient features that set it apart from the competition.

Bringing affordable solar energy solutions to the world is tied very intimately to Luangrath’s other passion: the humanitarian mission of the company.

“Having been a refugee myself from the Vietnam War, I’m proud to be part of a company that’s trying to make a difference in the lives of the 1.5 billion people in the world living without electricity.  Changing those lives is as simple as providing a solar-powered battery bank to charge their phones so they can keep in touch with family members or as basic as giving them lights at night so they can see and work after dark.  We can make a difference and the Raptor’s solar-powered battery bank and LED light is the solution.”

An early example of Luangrath and Inergy’s dedication to the humanitarian mission came when the company donated a Kodiak to an orphanage in Ghana. What once was a dark, unpowered refuge for displaced children now became a place fully equipped with electricity and all the benefits.

“That was one village in one country,” said Luangrath. “We recognize that we have the potential to make an impact on a global scale, to positively influence the lives of millions. As part of this vision, we’re including an incentive program with the launch of the Raptor Pro.”

The incentive program mentioned by Luangrath is being kick-started by the company donating 100 Raptors into a donation pool that will increase by 1 Raptor for each 10 Raptors purchased during its Indiegogo crowdfunding campaign.

“Here’s how it works:  for every purchase you make, we will send you an email so you can vote for your favorite charity or non-profit,” said Luangrath. “We will start off the donation pool with 100 Raptors.  That means the top 10 charities with the most votes will receive at least 10 Raptors to benefit their community.  That number will increase as the donation pool grows.”

At launch, the Raptor Pro will be available for an MSRP of $84.99, but early pricing is available through Indiegogo for a limited time, until the project is funded.

“It really is a beautiful thing,” said Luangrath.” The needs of so many people can now be addressed by a device that retails for less than eighty-five dollars. That is a statement in itself.”

Inergy began as an idea between a few passionate individuals, but that passion soon caught fire. One of Idaho’s most successful tech startups, Inergy continues to grow by cultivating a team of extraordinarily talented individuals from the local colleges and the nearby national energy lab, the Idaho National Lab (INL).

“People see that we are located in Pocatello, Idaho, and think we’re just a small company in the sticks,” said Luangrath. “Well, while there may be quite a few sticks around here, what many don’t realize is the huge amount of top-tier talent available in the region. Idaho is known for its potatoes, but we’re planning to make it known for tech as well. 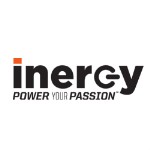 View all Releases by Sean