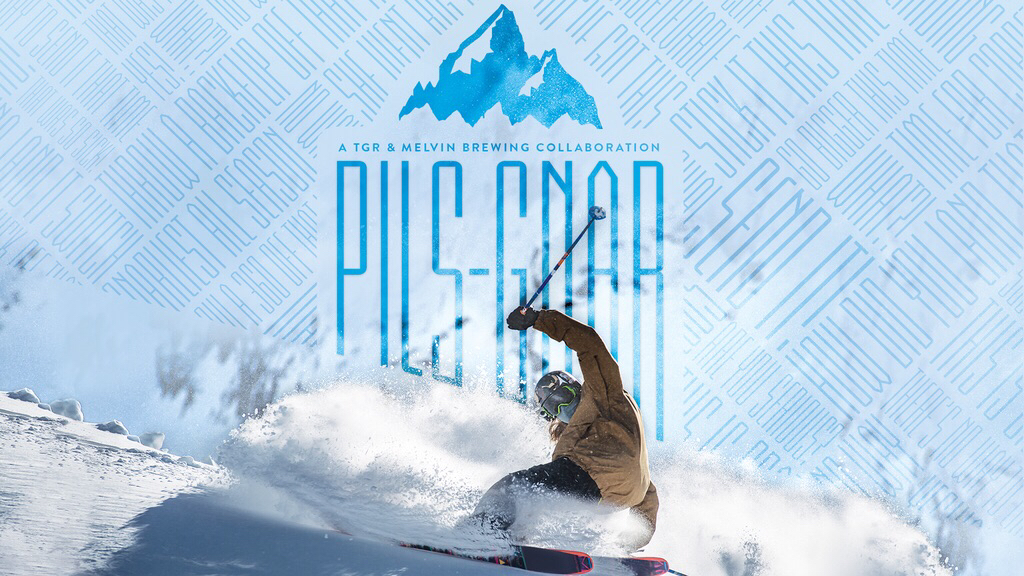 Collaborating with fellow ski bums, neighbors, and old friends at Teton Gravity Research, Melvin Brewing and TGR are going all in with the first-ever collaboration between these two Wyoming-bro icons.

JACKSON, WY (November 6, 2017) — Melvin Brewing is announcing the newest brew to its lineup – brewed specifically for those that get after it in the mountains – with the Pils-gnar. Collaborating with fellow ski bums, neighbors, and old friends at Teton Gravity Research, Melvin Brewing and TGR are going all in with the first-ever collaboration between these two Wyoming-bro icons.

The Pils-gnar is available in an exclusive release at select locations beginning November 8, 2017. This is the light and crisp après brew like you read about in Apres Magazine, brah. The Pils-gnar is inspired by, and built for, those who shred the gnar.

Pils-gnar uses slightly sweet malt under a canopy of bright, tangy, flowery hops to achieve an aroma that’s spicy and fruity at the same time. It has a balanced finish that just begs another quaff…in the lot, on the chair, out the back of your truck, in the brewery, or on the porch.

With an ABV of 4.5% you don’t have to stick to just one (ahem, sixer). This light-bodied German-style pilsner sessions like the best medium-bodied slightly sweet, slightly spicy ale you’ve ever tasted, and won’t slow down your own sessioning in the park or under the tram, day after day…our in our case, season after season.

TGR’s Jones Brothers and Melvin Brewing’s Jeremy Tofte cut their teeth skiing the gnarly terrain in the early days of Jackson Hole when things were much less tamed, forming a friendship and crafting businesses the old fashion way through hitting the mountain day after day and doing the hard work. Now, they’ve joined forces up here in JH in an exclusive, limited edition sports drink for the gnarly.

You smell what we’re steppin’ in? This shit is gnarly bro!

So unbuckle your boots and buckle up for the after party. Yes, it may be as elusive as the secret powder stashes you’ve been drooling over in TGR films since you were 16, but you have to hunt for it dude. Earn that shit.

When you return from the backside of outer orbit, having finally established even a little glimpse of local cred, you want something as refreshing and sessionable as the terrain you just hucked all. friggin’. day. That’s Pils-gnar bro!

Do what we did: sell the house, sell the dog, move into your Subaru, wait for big dumps, and start shredding the gnar. It’s that simple. Seriously, how do you think you get into those TGR films anyway? If you’re as committed to the gnar as we are to brewing phat beers, we have something for you bro. Now take your skirt off, crush that and send it!

For all those times in between your three jobs when you’re not on the mountain, trying to stay warm and kill time until the next dump, there’s Pils Gnar.

Melvin Brewing, born in 2009, is the beer child of Jeremy Tofte and Kirk McHale to fulfill their desire to drink the madness. Their quest was to produce the biggest and baddest West-Coast Style IPAs in Jackson, WY. Like true chemists, they experimented on a 30-gallon, then three-barrel brew house system, and developed the award-winning Melvin IPA and 2×4 Imperial IPA. Today, Melvin Brewing has a full-scale brewing facility in Alpine, WY, a brewpub in Bellingham, WA and astoundingly, more than 40 mouthwatering beer recipes to its name, including a range of hoppy beers and other styles such as ChChCh-Cherry Bomb (Fruit Beer), Killer Bees (Honey Ale), Coffee Ruckus (Coffee Imperial Stout) and Wu’Wit (Belgian Wit).

For the low down on the madness visit, www.melvinbrewing.com.