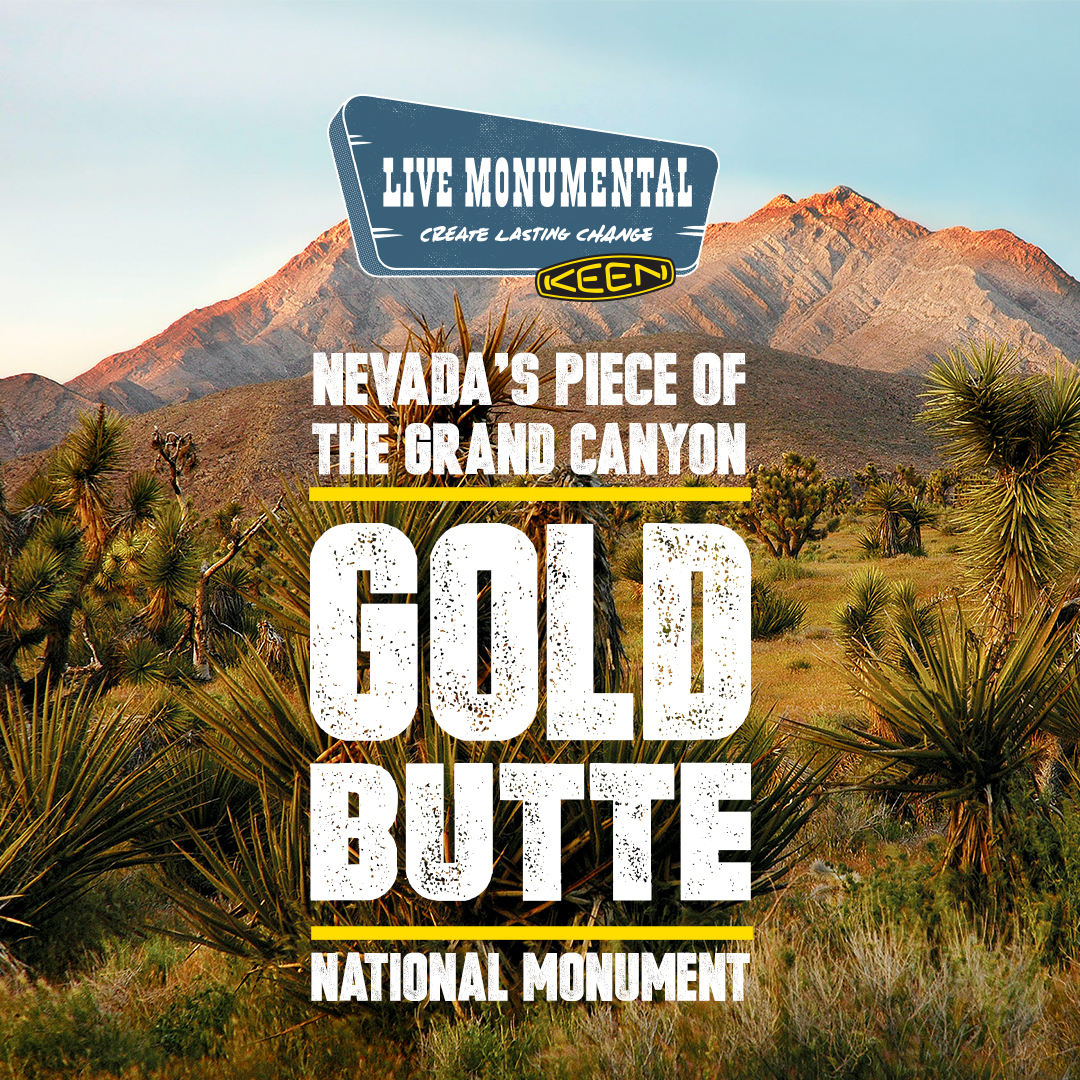 The designation permanently protects Nevada’s piece of the Grand Canyon

As one of the five landscapes highlighted in KEEN’s Live Monumental, KEEN celebrates Gold Butte National Monument and praises the Obama Administration for its historic action in preserving this natural wonder for future generations to enjoy.

“We’re proud to stand beside the thousands of Nevadans and Americans alike who recognized the rich, 3,000-year-old history of Gold Butte, says Casey Sheahan, KEEN President. It is humbling to know it will forever be a place of wonder, of secrets, of recreation, and of refuge for dozens of species who call it home.”

The designation of Gold Butte marks the third success for the Live Monumental campaign – a national movement to rally support for the protection of more than three million acres of public land across the U.S. for their recreation, environmental, historical, and cultural significance. The two other successes came in August 2015 when Boulder White-Clouds in Idaho was designated Wilderness, and in February 2016 when Mojave Trails in southern California was one of three new California National Monuments President Obama designated. The remaining two areas KEEN aims to help protect include: Owyhee Canyonlands in OR, and Birthplace of Rivers in WV.

Since its launch in July 2015, the Live Monumental campaign has embarked on a cross-country road trip – logging more than 10,000 miles in a yellow 1976 RV, stopped in more than 25 states, and captured more than 50,000 petition signatures, while rallying support from more than 60 businesses. The campaign has also hosted more than 75 events – including a reception on Capitol Hill in October 2015 – released a short documentary film and 10-stop national film tour in conjunction with Wild and Scenic Film Festival earlier this year, and partnered with the Outdoor Foundation’s Campus Challenge this fall to bring the Live Monumental film to 99 college campuses across the country to engage one million students.

“Three thousand years ago, agave was being roasted and petroglyphs were being carved in the rock formations within the Gold Butte area. Today, these agave pits, petroglyphs and the secrets, inspiration, and rich cultural history that define them have been protected,” says Kirsten Blackburn, KEEN Effect Communications and Advocacy Manager. “We are incredibly proud to have played a small part in that decision.”

KEEN is a values-led, independently owned outdoor footwear brand from Portland, Oregon with a mission to responsibly create original and versatile products, improve lives, and inspire outside adventure. Founded in 2003, KEEN ignited a revolution in the footwear industry with the introduction of the Newport sandal, launching the concept of Hybrid footwear into the market and setting KEEN on a path of driving consistent product innovation that exists today. KEEN strives to live by its values, from its products to its actions, and by activating communities and individuals to protect and preserve the places where we work and play. KEEN passionately endeavors to live fulfilling lives, challenge the status quo, do good, give back, and inspire others. Learn more at: http://www.keenfootwear.com