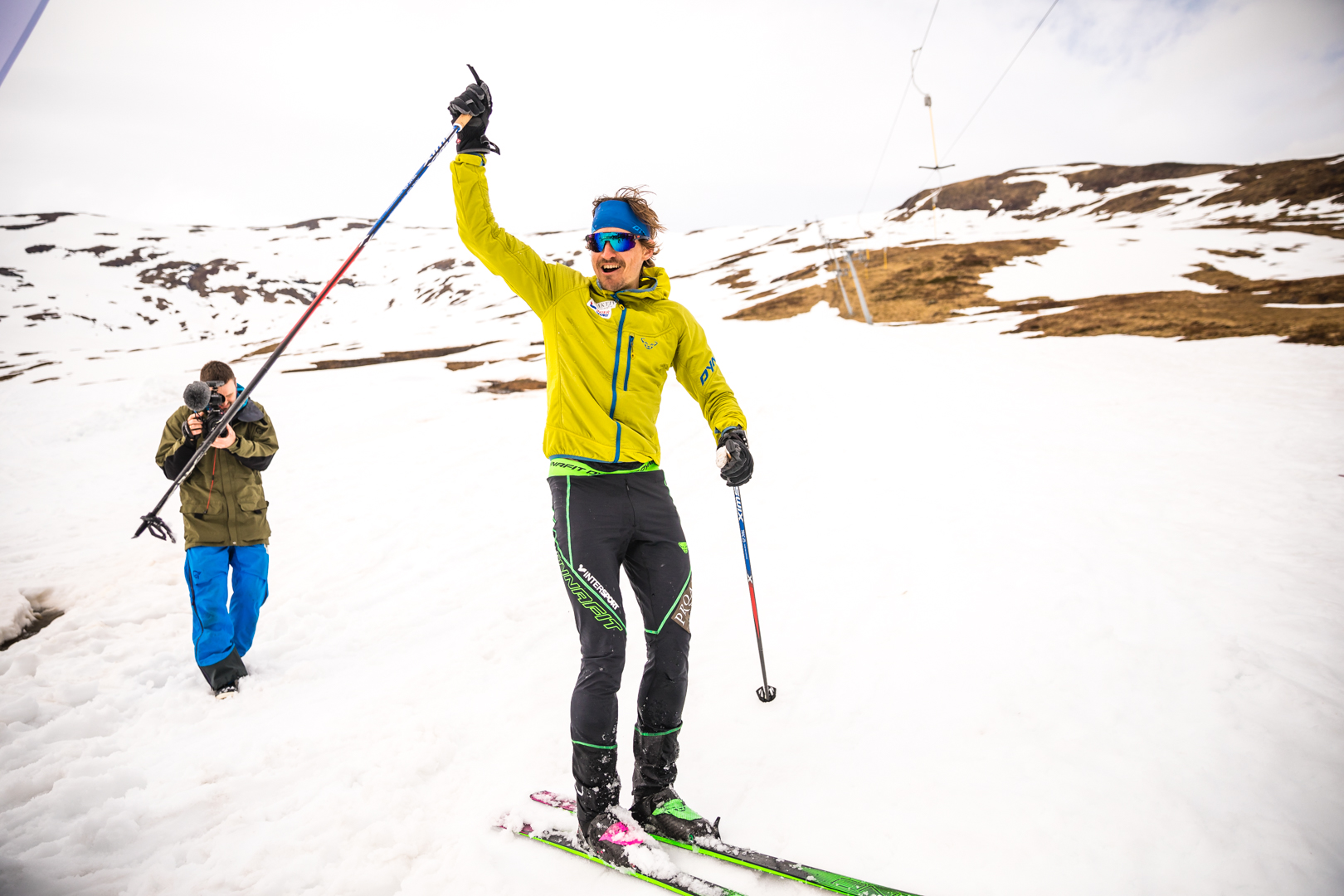 DYNAFIT athlete Lars Erik Skjervheim set a new world record on May 19-20 after 24 hours of ski mountaineering. The 37-year-old Norwegian covered an unbelievable 20,939 vertical meters ( appr. 68,697.5 feet). On a course of approximately 1.9k (0.56 miles), the athlete had to climb 460 meters of vert each loop. Skjervheim completed the entire loop 44 times in 24 hours, including the climb and the following descent on skis. At the same time, Malene Blikken Haukøy, 26, a member of the Norwegian National Ski Mountaineering Team, set for the first time a women’s record. At 15,440 meters of vert in 24 hours (50,656 feet), she has set the bar very high for those seeking to break the record.

For the world record attempt, the two athletes choose the Myrkdalen Ski Area near Voss, Norway. For equipment, the Norwegians relied on the innovative DNA Line from DYNAFIT, which was developed specifically for ski touring races with its impressively minimal weight. The large part of the course took Skjervheim and Haukøy along a groomed ski run, which had been salted due to the spring skiing conditions. At the halfway point on the course, an aid station had been set up with fluids and, at the highest point, the team had set up a feeding station so both ski mountaineers could get nutrition on the downhill to keep themselves fueled and hydrated without losing time.

For this effort, the DYNAFIT athletes were supported by a 15-person team which counted the completed loops, dried skis and skins in the valley, and were available for technical support. The starting gun for the world record went off at 3 p.m. MET on May 19. Friends and family encouraged and cheered on both athletes during the entire 24-hour period.

With 20,939 meters of vert, Lars Erik Skjervheim significantly surpassed the existing record set by Mike Foote in March 2018. Foote, an American, had covered 61,170 feet (18,644 in meters) on a course with 311 meters of vertical. For women, no official record had been registered yet. Malene Blikken Haukøy will now be entered into the record book with her 15,440 meters of vertical.

“I will never do that again,” commented Lars Erik Skjervheim about his 24-hour world ski mountaineering record. “The hardest part of this project was between hours 14 and 19. I noticed how my energy bit by bit dwindled. Also, I started to get some very bad muscle aches in my right leg. But after 20 hours I could see the light at the end of the tunnel and that gave me another big push. I am proud and happy that I could set a new record. I have dreamed of this for the last three years.” Malene Blikken Haukøy also revealed her happiness about the successful record last weekend. She noted, with a wink of the eye: “Chips and dip that taste a bit like being on holiday and non-alcoholic beer are not as successful of a combination for a Saturday evening.”

As the athletic mountain brand, DYNAFIT knows no compromise and is dedicated to delivering the best equipment and apparel for mountain athletes wanting to move fast and light in the mountain. Since the advent of the revolutionary “Low Tech” ski mountaineering binding over thirty years ago, DYNAFIT has been committed to developing the lightest and fastest most reliable gear for human-powered alpine pursuits in all season, enabling its customers to define and reach their Mountopia, DYNAFIT North America is part of Salewa North America, a subsidiary of the Oberalp Group, a family-owned business with global operations, specializing in premium outdoor consumer products. Boulder-based Salewa North American manages the USA/Canada sales, marketing, operations, distribution and customer service functions for the Salewa brand along with DYNAFIT (based in Munich, Germany), Pomoca (based in Aubonne, Switzerland), and rock climbing brand Wild Country ( based in Tideswell, U.K.) www.dynafit.com