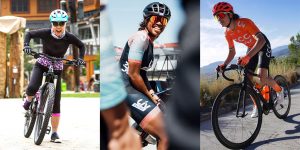 NEWBURY PARK, Calif. (June 16, 2020) – Liv Cycling, the company dedicated to getting more women on bikes, today introduced Liv Committed, a global brand campaign reaffirming its commitment to women in cycling. The Liv Committed campaign highlights the ways Liv is dedicated to women in all cycling disciplines and at every stage of a cyclist’s journey.

“While some bike brands have reduced or dismantled women’s product development, we remain steadfast in our resolve to design and engineer bikes specifically for women, ultimately ensuring fewer barriers and more choices for everyone,” said Bonnie Tu, founder of Liv Cycling and Giant Group chairperson which includes Giant, Liv, Momentum, and CADEX brands. “If there is no difference between women and men cyclists, then let’s design bikes for women, and men can add men’s-specific components and touch points.”

Featuring WorldTour team CCC-Liv and Liv Racing athletes Ayesha McGowan and Rae Morrison, alongside other leaders in women’s cycling, the Liv Committed campaign elevates the conversation around the disproportionate number of women and girls participating in cycling and the racial disparity that exists within the sport.

“The more I got involved with professional racing, the more I noticed a glaring lack of representation in the bike industry — from videos and magazines to the marketing and social media feeds of almost every cycling brand. When the industry finally began making space for women, it was mostly white women,” said Ayesha McGowan, professional road cyclist for Liv Racing. “Together with Liv, I’m committed to welcoming every rider of every color and seeing our industry represent the full, diverse population of women who love to ride.”

Earlier this year Liv announced several investments for 2020 including

“When I began racing in 2006, I wasn’t expecting to earn money or become a full-time pro. I have noticed in a positive way that the recognition of women cyclists has increased with people and brands that push the industry to raise the bar – like Liv,” said CCC-Liv rider and 12-time world champion, Marianne Vos. “We are all adjusting to the changes in our lives and to racing due to the global pandemic, but we still train, we still keep our eyes on the prize and remain fully committed.”

To help keep women engaged with cycling during the COVID-19 pandemic, Liv created additional ways to engage with the cycling community online. In March, Liv TV debuted featuring the latest in women’s cycling videos, including helpful how-tos, skills guides and inspiring stories from athletes. In addition, members of CCC-Liv team and Liv Racing host weekly rides on Zwift to bring together women who want to ride and train together virtually.

“The goal of the Liv Committed campaign is to highlight Liv’s unwavering commitment to women,” continued Tu. “We know there will be a day when we can all ride together again. Until then, we will continue to seek out meaningful ways to connect with and inspire women to ride.”

Following the campaign debut, Liv will host a series of “Ask Me Anything” (AMA) Instagram sessions with its founder Bonnie Tu and Liv athletes Ayesha McGowan and Marianne Vos. The sessions will connect the community about topics including how things have changed since the filming of the campaign videos, why designing bikes for women matters, and their personal experiences as women in cycling.

The Liv Committed campaign will be distributed globally throughout 2020 in over 40 countries, including the U.S., United Kingdom, France, Germany, Australia, Canada, Taiwan, Japan, Korea and The Netherlands. It will run across digital platforms around the world, reaching an estimated six million people globally.

Liv Cycling is the only comprehensive cycling brand in the world dedicated solely to women. Founded in 2008 by Giant executive Bonnie Tu as part of the Giant Group, Liv creates innovative bicycles and gear to fit and perform at the highest level. Liv aims to empower all female riders from beginners to pros. With a global team of retailers, athletes and events, plus a growing online presence focused on riding skills, bike maintenance, nutrition, travel, and other experiences – Liv strives to support community and be the number one resource for women cyclists around the world. For more information, visit liv-cycling.com.

View all Releases by
Liv Cycling