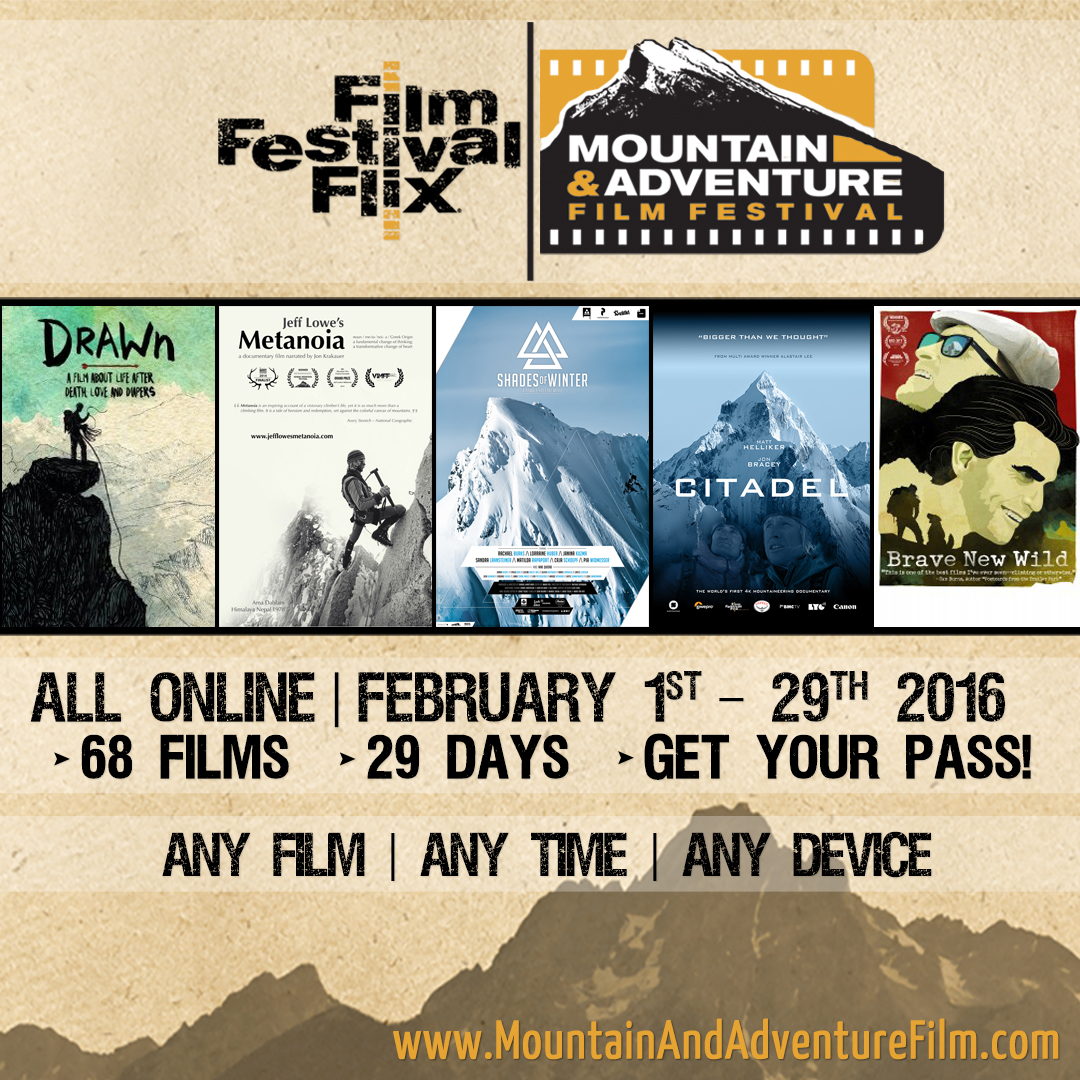 Following the successful 2015 unveiling of the Mountain & Adventure Film Festival, the first online festival of its kind, Film Festival Flix is excited to launch its 2016 festival, bigger than ever!

This year’s festival will showcase 68 films on demand over an unprecedented 29 days in February. Like “Netflix” for mountain films, viewers can watch Any film, Any time, on Any device. A global audience can further interact with filmmakers, athletes, conservation experts, and brand partners through live Google Hangout Q&A’s, Twitter Chats, and Facebook Q&A sessions.

New to 2016, the festival announced the formation of its elite Athlete Ambassador Council and established partnerships with 15 Non-Profit Organizations. The festival amplifies the films and messages to the world through the internet.

Film Festival Flix CEO and festival Founder, Benjamin Oberman stated, “We love going to festivals. But for the select few who have the time and money to attend, we found the average attendee saw 1 to 3 films due to tickets, scheduling, parties, or business complications.”

Making the festival Online and On Demand gives viewers around the world the opportunity to see every film on their own terms. This gives greater exposure to more films, athletes, and brands. The average viewer in the 2015 festival spent 10+ hours watching films. With almost double the content in this year’s festival, the festival expects viewers to watch approximately 15 hours during the festival.

Oberman states, “I wanted to create a sustainable program that unites and supports the outdoor community where everybody can feel like a part of the community and everybody wins.”

Using film as that central medium, we want viewers to get inspired, get outdoors, and have adventures of their own. We’re amplifying our non-profit partner’s voice to a wider community as well as donating more than 25% of festival revenues to these organizations who advocate for the places and pursuits we love as well as introducing these experiences to those who can benefit most.

We have developed an elite Athlete Ambassador Council who’s work and stories we support. We provide cash prizes, awards, revenue sharing, and production support to filmmakers, ensuring we’ll have quality films for years to come. And we provide a unique combination of repeat impressions, voice, online engagement, and live event activation for our brand partners.

We recognize the value of community. “It’s equally important, but different than watching films.” states Oberman. Throughout the year, we offer select films for monthly, quarterly, or custom created event series in theaters, retailers, gyms, and outdoor venues. Following the festival, select films will be available on the Film Festival Flix VOD platform and branded channels adding to our library of great films from the past 30 years and the next.

“There are so many significant events, achievements, and people captured on film that are hard, or impossible to find. We want to be sure you can enjoy them all. They deserve to live on!” says Oberman.

The festival will take place online at www.MountainAndAdventureFilm.com from February 1st – 29th, 2016. Throughout 2016, the festival will offer a digital winners showcase, sport / season specific micro-fests, films for download and rental anytime on demand, and live events in theaters, retailers, gyms, and outdoor venues in select cities across the country.

For questions, to partner with the festival, or to book screenings in your venue, please e-mail: BenjaminOberman@FilmFestivalFlix.com.

To learn more about the festival, please visit www.MountainAndAdventureFilm.com or www.FilmFestivalFlix.com