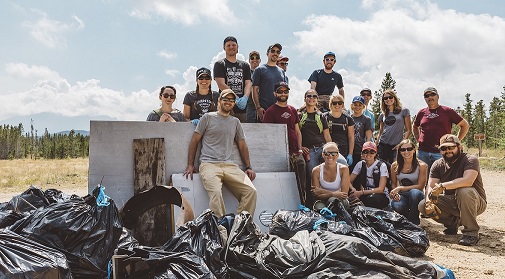 Inspired by the efforts of the Packing It Out team, two hikers attempting to pick up every piece of trash along the Pacific Coast Trail, members of the Exxel Outdoors Outdoor Performance Group took on a major cleanup effort of their own this week in Colorado. The group, which includes Sierra Designs (a proud partner of Packing It Out), Kelty and Ultimate Direction, hit the trails and campsites above Nederland to pick up an area that has gained notoriety in recent months for its trash.

In 2015, the Packing It Out team thru-hiked the Appalachian Trail, hauling out more than 1,000 pounds of trash from the scenic trail. This year, they are carrying out their mission along the 2,650-mile Pacific Crest Trail to continue spreading a message of environmental stewardship.

“If you spend any time with these guys, you immediately get a feel for their incredible passion for this project, and it’s contagious,” says Sierra Designs marketing manager Candyce Hedlund. “The idea is a simple one: trash in our natural spaces is everyone’s problem and responsibility, and we wanted to do our part in a place that really needed attention.”

The Nederland area was the focus of a recent New York Times article, which describes how a growing transient population in the surrounding national forests has led to problems with trash on public lands. More than 20 members of the Exxel team participated in this week’s cleanup there, pulling out everything from a freezer door to a dog crate and several suitcases. In total, they hauled out 680 pounds of trash in just a couple of hours, roughly the equivalent of what Packing It Out has collected along the PCT since May.

“We’re so proud of the Packing It Out team, as well as our group’s efforts this week,” says Hedlund. “We hope this will show other people how easy it is to make a big difference-whether you have several months or just one day.”

Sierra Designs was born in 1965 with a pioneering spirit into the world of backpacking and camping. Today, our crew of outdoor enthusiasts and seasoned explorers are on a mission to fundamentally redefine how we venture in the backcountry. We create outdoor equipment and apparel driven by technology and fearless approaches to keep adventurers miles from anything ordinary. Find more information at www.sierradesigns.com.