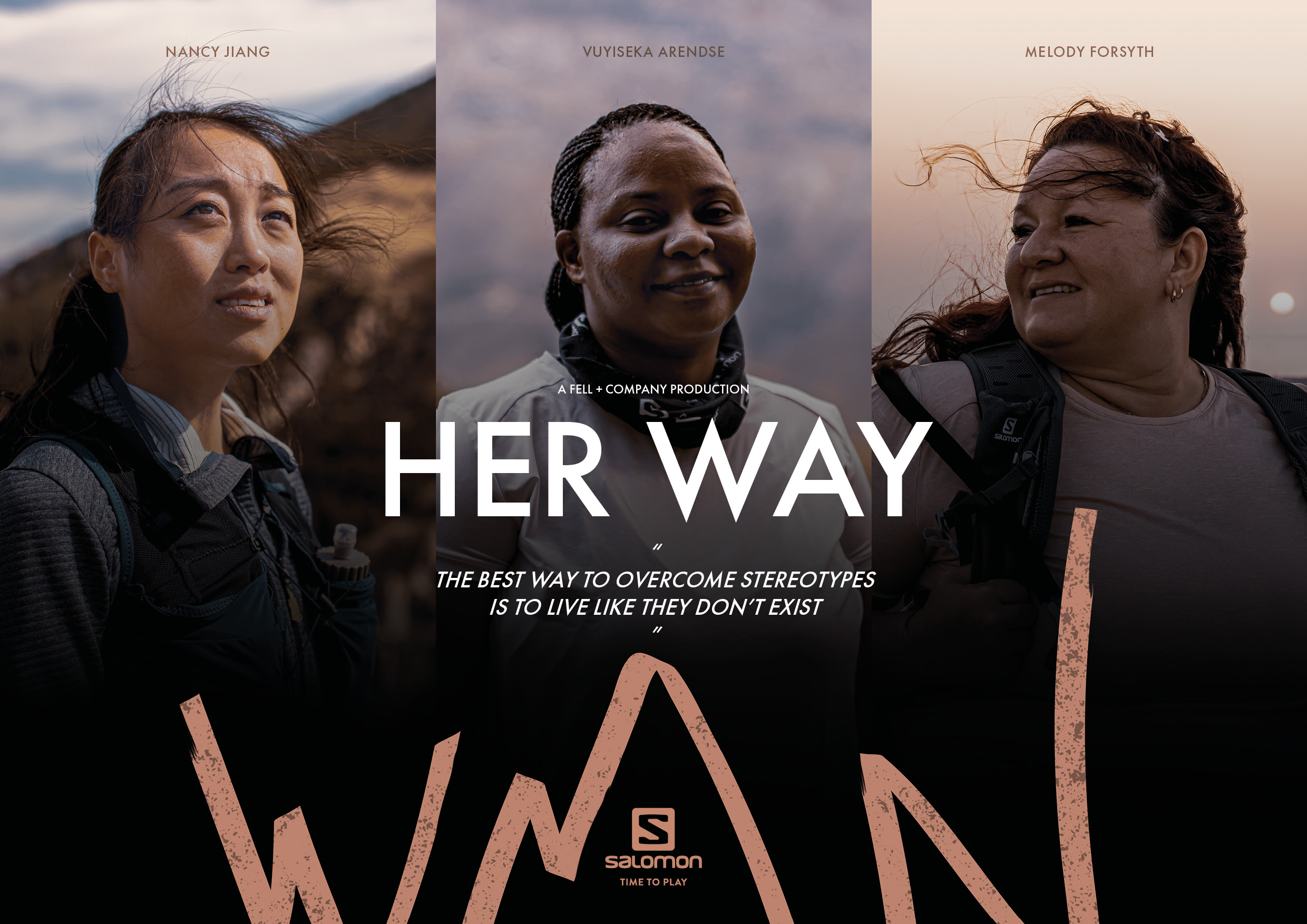 OGDEN, Utah (April 27, 2021) – Launching today, Salomon’s new short film “Her Way” celebrates three women who have chosen to ignore stereotypes as they chart unique lifepaths. The film coincides with the expansion of Salomon’s WMN campaign, which introduces new running and outdoor footwear, apparel and packs in women’s-specific designs, and an Instagram giveaway contest.

The 10-minute film follows a single mother and member of the first all-female firefighting team in South Africa; a Chinese-born structural engineer and trail runner in New Zealand; and a delivery nurse and mother of four with a love for America’s National Parks. Produced by creative production agency Fell + Co, the film was created by a largely female crew with nine women contributing to the film, including an original score titled “Her Way” composed for the film by Clare Vandeleur with lyrics and vocals by Danielle Bakkes.

“It was an absolute honor to work on this film with Salomon. I love how they support women in whatever paths they pursue,” says Melody Forsyth, a mother, nurse and main character of “Her Way.” “We all find happiness and fulfillment in different ways, and it’s awesome to have a company that recognizes and supports this and empowers us as women.”

To celebrate the launch of the film and elevate other women’s inspiring stories, Salomon is holding the “Her Way” Instagram giveaway contest from April 30 to May 17. Salomon is asking its followers to nominate a woman in their own life who inspires them and to share why. To be eligible, participants must include #SalomonWMN and #HerWay in an Instagram post along with a photo of the nominee. Following the contest, 10 winners will be selected, and their nominees will receive a Salomon WMN goodie box, including a full apparel kit and pair of recently-launched Salomon shoes.

As a leader in the pursuit for women’s equity in the outdoors, Salomon’s WMN campaign is an integral part of the brand and its effort to advocate for women’s parity in the outdoors. “We launched the WMN campaign over two years ago to help Salomon reach new women audiences with emotional messaging that encouraged the breakdown of classic clichés in our outdoor world,” says Becky Marcelliano, outdoor marketing manager for Salomon North America. “It has become a key pillar of the brand as we continue to support equity within our core sports.”

Full profiles on the three women featured in the film below. To watch the film, please visit https://www.salomon.com/en-us/wmn-campaign. Salomon recognizes that “Her Way” does not include representation from every deserving community, but is honored to share the stories of Vuyiseka Arendse, Nancy Jiang and Melody Buck Forsyth and looks forward to continuing to amplify voices from all communities in the future.

The Stars of “Her Way”
Born in the small town of Beaufort West, South Africa, Vuyiseka Arendse began volunteering as a firefighter when she was 19. Now 26, the single mother and family provider works for the NCC in Cape Town as a member of the Juliet Crew, the first-ever all-female firefighting team in the country, protecting local landmarks from wildfires in the Western Cape region.

Chinese-born Nancy Jiang moved with her family from Ma’an Shan to Auckland, New Zealand when she was five. She studied structural engineering and today is the only female engineer in her firm. Small in stature and needing to prove herself in the workplace, she found her release through a love of trail running in the mountains above Queenstown, despite having been told as a kid that “Chinese people do not run.”

A caregiver at heart, Melody Buck Forsyth is a mother of four and a delivery nurse. In 2015, she gave birth to her daughter, Ruby, who was born with Down Syndrome. Despite “sometimes getting looks on the trail” because she might not fit the hiker stereotype, the outdoors has served as an escape for Melody and her family, where they connect and decompress.

Film Credits for “Her Way”