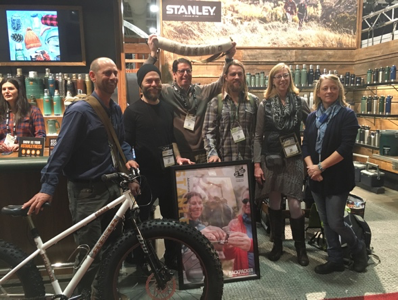 For spring 2016, Backpacker suggests you “class up your camp toasts”

SEATTLE, WA (March 21, 2016) – Stanley, a brand of PMI, is proud to announce that the brand’s Adventure SS Shot Glass Set has been named one of Backpacker magazine’s 2016 Editors’ Choice Awards. Backpacker magazine Editors’ Choice Award is one of the most prestigious awards in the outdoor industry given annually to products in recognition of their outstanding innovation in design, materials and performance.

“The Backpacker Editors’ Choice Award is the ultimate stamp of approval an outdoor brand can receive and the Stanley team is honored to be among this spring’s recipients,” states Kelly Kraus, Vice President of PMI’s STANLEY brand. “As the brand that literally invented vacuum insulation over a century ago, we remain focused on bringing innovation and insightful design to market and Backpacker’s recognition is a great accomplishment.”

Introduced in fall 2014, the Adventure SS Shot Glass Set is genius in its simplicity. A hammertone green stainless steel cylindrical carry case with a screw top lid houses four 2-ounce stainless steel shot glasses. With a lid loop for clipping to packs, the Adventure SS Shot Glass Set is a perfect way to easily and quickly upgrade a drink with friends at the end of a great day outdoors.

“This shot glass set manages to be both rugged and classy – it upgrades every backcountry happy hour,” explains Backpacker Editor-in-Chief Dennis Lewon.

The Backpacker team shares why they chose to give Stanley Adventure SS Shot Glass Set the Editors’ Choice Award in a great video now available on Backpacker.com.

Backpacker (www.backpacker.com) brings the outdoors straight to the reader’s doorstep, inspiring and enabling them to go more places and enjoy nature more often. The authority on active adventure, Backpacker is the only outdoor media whose editors personally test the hiking trails, camping gear, and survival tips they publish.

About the STANLEY brand:

Founded in 1983 by Rob Harris and guided by principles of sustainability, community and integrity, PMI manufactures, markets, and designs innovative food and beverage container solutions under three brands.  Their two most recognizable brands, Stanley® and Aladdin®, are both over 100 years old and sold globally.  Migo® was founded in 1999 and is rapidly growing in the Asia Pacific region.  PMI also creates private label products for select global retailers.  Headquartered in Seattle, PMI has offices in Bentonville, Shanghai, Amsterdam, Manila, and Rio de Janeiro. Additionally, PMI has ownership in three manufacturing facilities, one in China and two in Brazil.

View all Releases by Anya