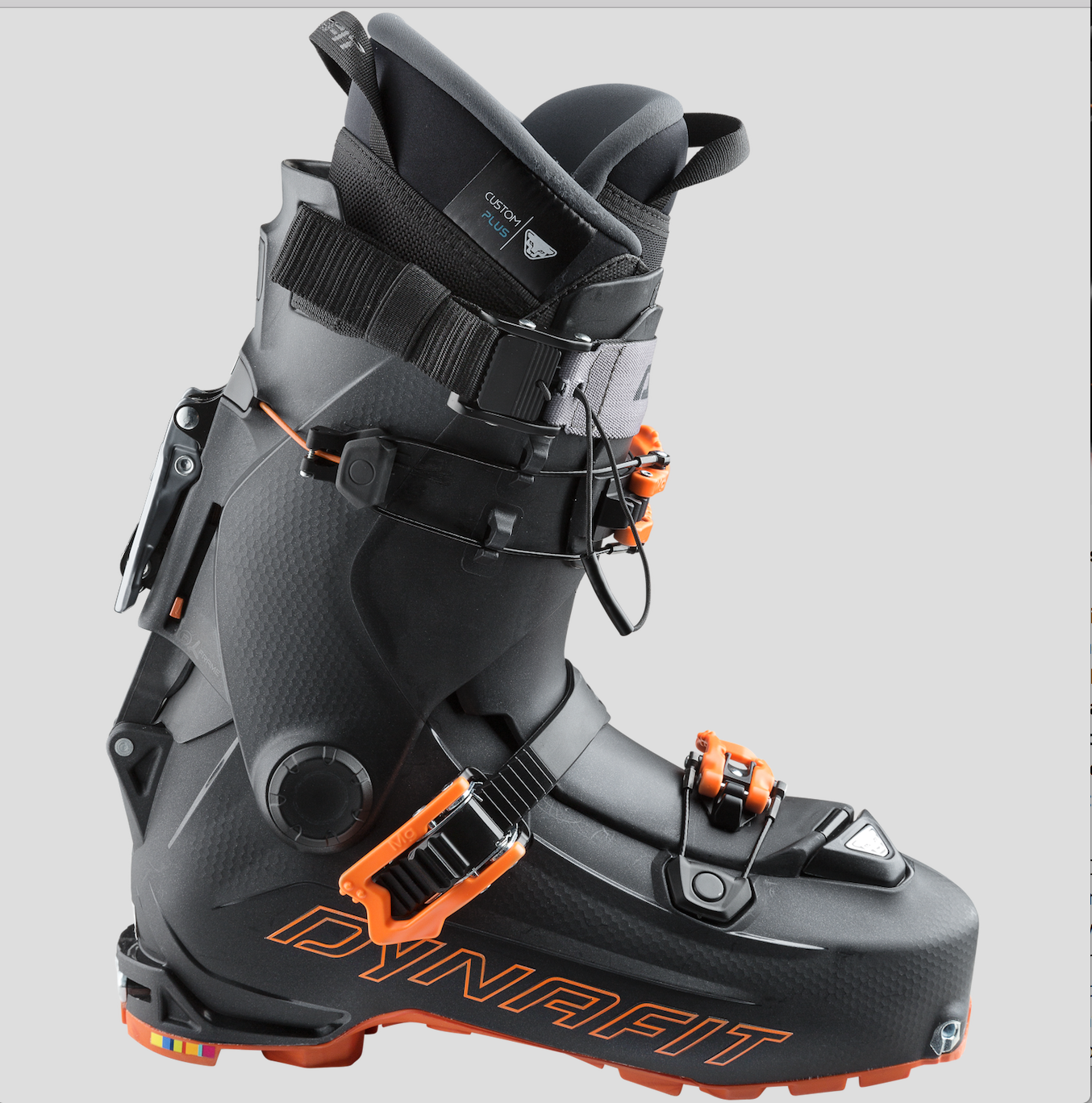 Should a ski touring boot be oriented more for the ascent or the descent? As of Winter 2018-19, this basic ski touring question will finally be a thing of the past because DYNAFIT has eliminated the question of “either-or.” Now, it is simply both.

Should a ski touring boot be oriented more for the ascent or the descent? As of Winter 2018-19, this basic ski touring question will finally be a thing of the past because DYNAFIT has eliminated the question of “either-or.” Now, it is simply both. With the Hoji Pro Tour the mountain endurance brand is launching a revolution in ski touring boots. It is setting new standards when

it comes to functionality, handling and comfort. With one simple motion, the boot is transformed from an efficient and light climber with excellent freedom of movement into an alpine downhill miracle that will thrill with its rigidity and optimum power transfer. Performance compromises? Not with this boot – and the same goes for cold fingers or stressed-out fumbling around when switching between climb and ski modes. Thanks to the patent-pending Hoji Lock System, the switch between modes is child’s play and utterly comfortable with just a simple kick of the boot: The ski/walk system’s mechanism is an integral part of the closure system – consisting of three buckles and an Ultra Lock Strap. So, the boot is adjusted with just a single lever.

The development team at DYNAFIT has been working together with Canadian professional big mountain skier Eric “Hoji” Hjorleifson and Low Tech Binding inventor Fritz Barthel for three years to fine-tune this new ski touring boot. The ambitious goal: A boot that both passionate climbers and downhill-oriented backcountry skiers would equally embrace. The result: excellent articulation (range of motion) in the cuff for the way up, and the fresh powder performance of an alpine ski boot. In addition, this new all-rounder should also have impressive and simple handling as well as be light, comfortable and 100-percent reliable. Bottom line: Bar none, it should be THE backcountry boot of choice. With the Hoji Pro Tour, the inventors have come up with a true masterpiece. It will be available for Winter 2018-19 in both men’s and women’s models. There are no compromises with this new ski touring boot. On the descent, it totally holds its own against alpine competitors thanks to its high rigidity and optimum power transfer to the ski. At the same time, the boot enables efficient climbing technique with superb comfort and maximum freedom of movement while remaining lightweight. These characteristics lend the Hoji Pro Tour a unique selling point in the industry.

EITHER-OR IS SO YESTERDAY – ONE MOVE TO SWITCH

The Hoji Pro Tour weighs in at a light 1,450 grams (size 27). On the ascent, the V-shaped tongue and the cuff rotation of 55 degrees mean maximum freedom of movement, flexibility and comfort. This enables a natural, energy-saving walking motion even on very steep terrain. The time-tested Speed Nose means a more minimal toe and a setback pivot point for increased efficiency, agility and maneuverability. Downhill, too, this boot knows how to be totally convincing. Thanks to its unique construction and closure system, the Hoji Pro Tour is one of the most performing ski touring boots on the market today. Its ideal ex means the boot supports the foot precisely, holding it in a stable position and thus offering optimum power transfer. With a last width of 103.5mm, an Ultra Lock Strap and three micro-adjustable buckles, the foot sits ideally positioned to deliver performance and function precisely on the downhill, even in demanding terrain. The quick and simple switch between uphill and downhill modes is accomplished with just one kick, thanks to the patent-pending Hoji Lock System. The ski/walk system’s mechanism is integrated into a technically intelligent cable system along with the cuff-buckle and the Ultra Lock Strap. For the switch into downhill mode, only the rear lever must be moved.

After that, the boot is locked into an 11-degree angle and, together with the buckle system, is then ready to take on whatever aggressive skiers throw at it.

Due to its versatility, the Hoji Pro Tour is indeed the ideal companion for demanding backcountry skiers who would rather not be forced to choose between efficient climbing, or fun, powerful performance on an alpine descent, and who also prioritize elegant, simple handling. The intelligently engineered Hoji Lock System means the time-intensive and stressful adjusting and then ne-tuning of a boot when moving from walk to ski mode and vice versa is a thing of the past. When a given ski tour demands frequent transitioning, this value becomes even more clear. The best of all: even ngers stay warm because you can forget about the need to pull off a glove. The rear lever can also be easily accessed even with touring pants snugged around the boot; it is designed so that a simple kick with the ski boot enables the switch. Speed up – Kick down.

An intelligent special feature of the Hoji boot is revealed when skiers are confronted with an icy traverse on especially steep terrain: the boot is not only compatible with semi-automatic crampons; it is also suited for use with the new, ultralight Cramp-In crampons developed in partnership with mountain sports brand SALEWA. Weighing just 260 grams, it is currently the lightest crampon on the market. Using a special mechanism with hooks and corresponding inserts on the sole, this crampon is attached directly to the ski touring boot. It therefore sits more precisely, and is more stable and more reliable, without requiring annoying straps or baskets.

When it comes to other construction details of the Hoji Pro Tour, developers also turned to the time-tested, reliable features and technology from DYNAFIT, as well as the straightforward and still effective design. Premium materials make the Hoji Pro Tour particularly durable and long lasting. When it comes to grip and stance while walking out of the binding, the Pomoca Climbing Sole exhibits consistent performance with its special rubber blend, even during drastic temperature fluctuations. Of course, the well-received DYNAFIT Masterstep insert also comes with the Hoji Pro Tour. With its longer entry guidance grooves, this insert offers increased comfort and eases entry into the frameless Tech binding. This boot is 100 percent made in Italy.