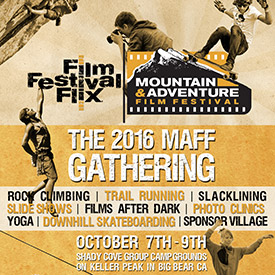 “We love film festivals” says Oberman. “But there are two distinct parts of a film festival. One part is watching great films which you may never have the chance to see otherwise, and our online film festival addresses that beautifully. And the other is purely social, which is where the MAFF Gathering comes in.”

The three day event will bring the SoCal outdoor community together to camp, climb, explore, play, eat, drink, and of course, watch films. We expect to have 300+ attendees each day plus approximately 20 outdoor brands, local businesses, and non-profit partners exhibiting their products in the vendor village.

With the purchase of a $29.99 pass, attendees will have access to the Gathering, Vendor Village, all clinics, classes, and excursions (capacity limitations may apply to certain events), games and contests, films after dark, camping on-site (limited to the first 90 registrants), sponsored drinks, and an online pass to the 2017 Mountain & Adventure Film Festival (a $29.99 value).

Reserve your space to attend on Eventbrite. The schedule of events will be announced in August with signups for clinics and excursions which have a limited capacity. For questions about the event or for more information on sponsorship and vendor opportunities, contact Benjamin Oberman.