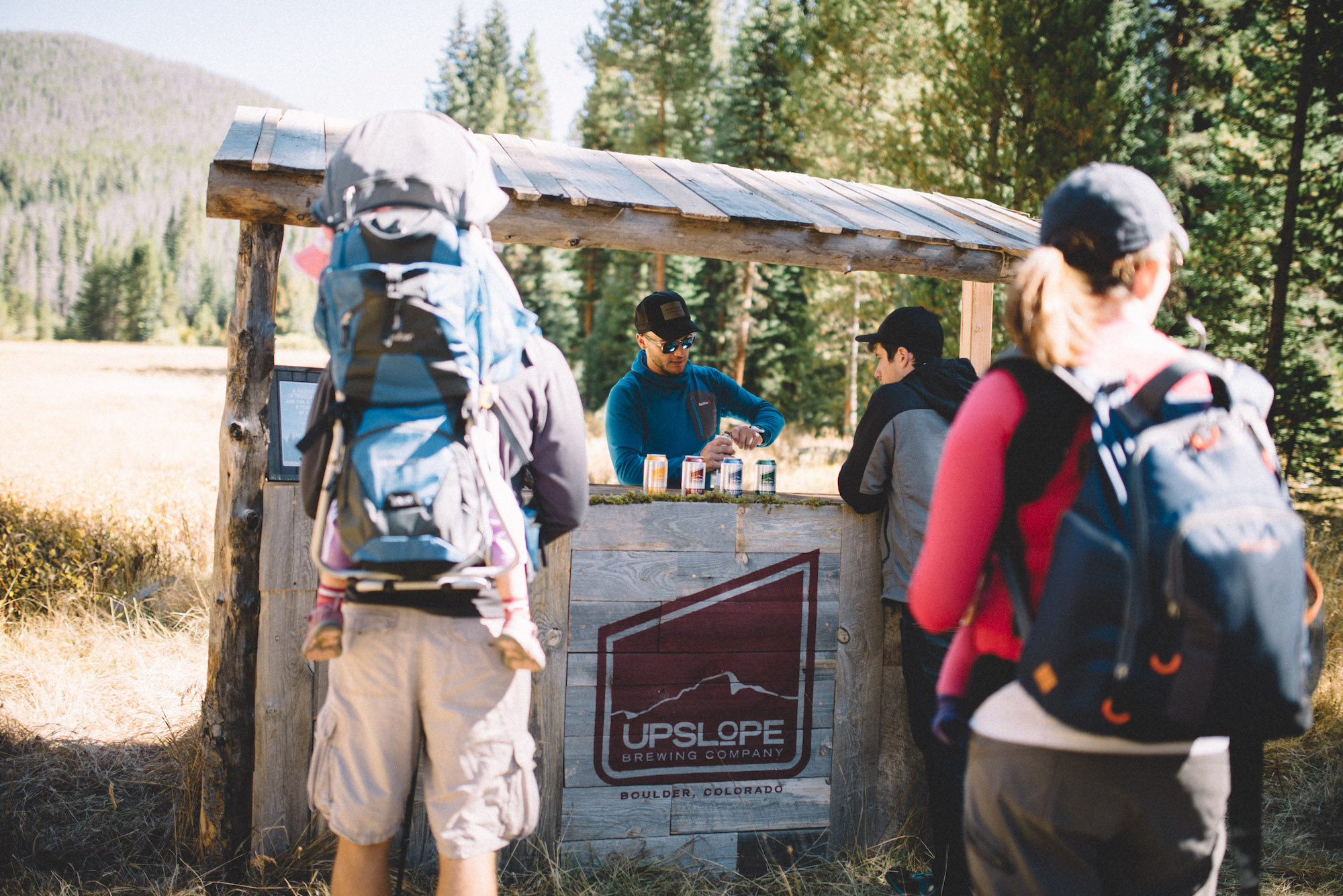 Boulder, Colo. (Aug 16, 2017) — Upslope Brewing Co, the Boulder-based craft brewer known for its mountain culture and a passion for the outdoors, will host its third annual Backcountry Tap Room on Sept. 16, 2017. The experience offers craft beer fans and outdoor enthusiasts a limited release beer in a rustic, pop-up tap room on a mountainside in Colorado’s backcountry, perfect for toasting to fall.

This year’s Backcountry Tap Room, through a partnership with Outside Magazine, is the exclusive release location of a limited collaboration brew celebrating the publication’s 40 years of inspired adventure and outdoor journalism. The 19.2-ounce Outside Denali India Pale Ale—part of Upslope’s rotating Tap Room Series—is brewed prominently with Denali hops and its limited edition can features a topographic overlay with a custom Outside label.

“We are proud to partner with Outside for their 40th Anniversary beer. Outside has inspired us over the years to live a life of adventure and creativity. We look forward to toasting to their continued success with this Denali IPA.”

After a spirited attendance at the 2016 Backcountry Tap Room and to ensure continued environmental stewardship, this year Upslope teamed up with the Leave No Trace Center for Outdoor Ethics (LNT). One hundred percent of proceeds will benefit LNT, with an emphasis on Colorado-based, 2018 “Hot Spots”, public lands that have sustained damage from overuse. An option to participate in a LNT volunteer day will waive the $10 event fee.

The Upslope Backcountry Tap Room is atop Granby Ranch by way of a three-mile hike or bike. Attendees will receive one can of Upslope’s Outside Denali India Pale Ale and up to two cans of Upslope’s year-round styles. There will be games, food for purchase, and leashed furry friends are welcome. Join the Backcountry Tap Room adventure at Upslopebrewing.com and Facebook.

Boulder-based Upslope Brewing Company is the creator of premium ales and lagers that are artfully crafted using natural ingredients. Packaged in aluminum cans for exceptional portability and because it’s best for the environment, Upslope complements the outdoor lifestyle and caters to the on-the-go beer enthusiast. The five flagship beers include: Citra Pale Ale, India Pale Ale, Brown Ale, Craft Lager and Imperial India Pale Ale. Additional installments are offered in a Limited Release Series, the Lee Hill Series and the Tap Room Series. In an ongoing effort to protect watersheds nationwide, and the key ingredient in Upslope ales and lagers, one percent of Upslope Craft Lager can sales benefits local Trout Unlimited chapters in the state in which the beer is purchased. Learn more about Upslope at www.upslopebrewing.com.

About Leave No Trace
The Leave No Trace Center for Outdoor Ethics in a national nonprofit organization that protects the outdoors by teaching people how to enjoy it responsibly. Their Leave No Trace in Every Park campaign incorporates Leave No Trace programs and educational opportunities nationwide including public education initiatives, interpretive materials, staff and volunteer training, onsite education, junior ranger programs and Leave No Trace Hot Spots events.  For more information, visit: www.lnt.org

About Outside
Outside is America’s leading active lifestyle brand. Since 1977, Outside has covered travel, sports, adventure, health, and fitness, as well as the personalities, the environment, and the style and culture of the world Outside. The Outside family includes Outside magazine, the only magazine to win three consecutive National Magazine Awards for General Excellence, The Outside Buyer’s Guides, Outside Online, the Outside Podcast, Outside Television, Outside Events, Outside+ for the iPad, Outside tablet edition, Outside Books, and Outside GO, a revolutionary, 21st-century adventure-travel company. Connect with Outside online, on Facebook, Twitter, Instagram and Pinterest.