Chaco Announces Agency of the Year for 2015 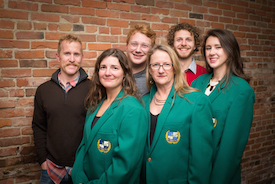 ROCKFORD, Mich. (December 28, 2015) — Every year, in the tradition of the Masters, Chaco presents a coveted green jacket to its sales agency of the year. At its recent sales meeting in Grand Rapids, Michigan, the team at Chaco awarded the official gecko-embroidered jacket to Yukon Trading Company.

“The Chaco sales group as a whole are some of the best in the business. We are greatly honored to receive this award,” said Kevin Rinderle, owner/general manager and key account manager for Yukon Trading Company.

Established in 1983, Yukon covers the Pacific Northwest and has been with Chaco since 2010. The team worked hard to build awareness for the brand in 2015, and saw double-digit growth for Chaco in both independent and national retailers.

“The team at Yukon Trading delivered its fourth consecutive year of record revenue growth, while continuing to provide superior account service, strong communication, and significant infrastructure investment in growing our business and driving brand awareness,” said Chaco Vice President of U.S. Sales Todd Gordon. “They’re a passionate and highly experienced team and have done an excellent job in creating opportunities, delivering results, and strengthening our relationships with our retail partners in their territory.”

About Chaco:
Born on the river in 1989, Chaco builds premium footwear for the outdoor-minded. As a result of the brand’s proprietary LUVSEAT™ footbed, the American Podiatric Medical Association (APMA) has awarded the Seal of Acceptance to all Chaco footwear styles. The APMA Seal is intended to raise awareness by identifying products of exceptional quality that are manufactured with comfort, health, and safety in mind. Simply put, Chaco is fit for adventure. Please visit us on the web at www.chacos.com, on Facebook, Instagram and Twitter.

Chaco is a part of Wolverine Worldwide’s Performance Group, which also includes the notable lifestyle brands Merrell and Saucony.