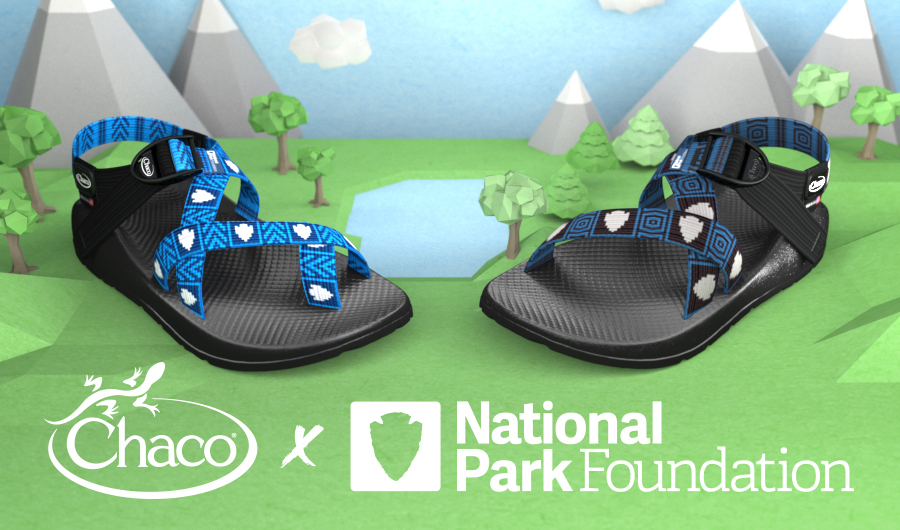 As part of Chaco’s multi-year commitment supporting the National Park Foundation, the brand is also developing a broader collection of made-in-the-USA sandals inspired by the history, wildlife, and landscapes of America’s parks and monuments, launching in Spring 2017.

“We’re so excited to be working with the National Park Foundation to support its mission of protecting beautiful landscapes and cultural history,” said Josh Weichhand, Chaco brand marketing manager. “With 100 years of national parks as our foundation, we’re looking forward to the next century and helping preserve America’s treasures for generations to come.”

The National Park Foundation, the official nonprofit partner of the National Park Service, was chartered by Congress to enrich and support America’s national parks and programs.

“Through our partnership with Chaco, park enthusiasts can literally ‘walk the walk’ and take pride in the fact that their sandals support the national parks they love,” said Will Shafroth, president of the National Park Foundation. “Part of building the strongest next century possible for our national parks is engaging in innovative partnerships that raise awareness about all the different ways people can support these treasured places.”

Born on the river in 1989, Chaco builds premium footwear for the outdoor-minded. As a result of the brand’s proprietary LUVSEAT™ footbed, the American Podiatric Medical Association (APMA) has awarded the Seal of Acceptance to all Chaco footwear styles. The APMA Seal is intended to raise awareness by identifying products of exceptional quality that are manufactured with comfort, health, and safety in mind. Simply put, Chaco is fit for adventure. Please visit us at www.chacos.com, Facebook: Chacos, Instagram: ChacoFootwear, Twitter: Chacousa.

Chaco is a part of Wolverine Worldwide’s Outdoor and Lifestyle Group.