Deeper into the Six-year Journey of Jeremy Jones 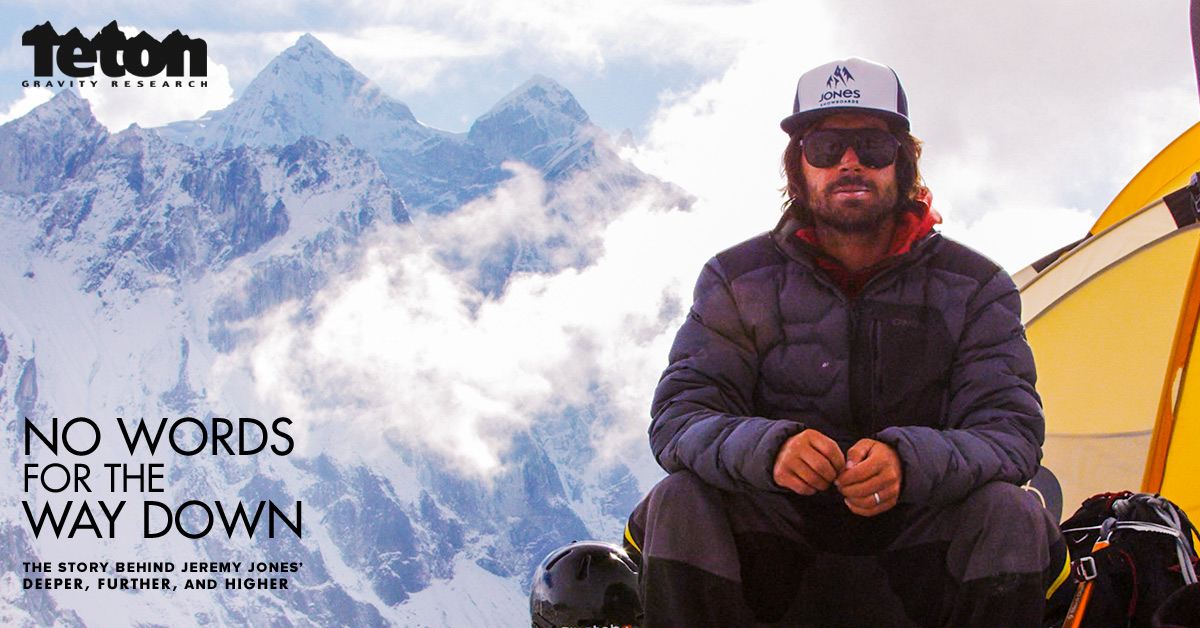 JACKSON, Wyo. (Oct. 7, 2015) Teton Gravity Research and Jeremy Jones announce the release of “No Words for the Way Down,” an immersive photo journal documenting the iconic action sports athlete’s life dedicated to exploration and human-powered ascent.

“No Words for the Way Down” tells the behind-the-scenes story of Jones’s groundbreaking expedition film trilogy (“Deeper,” “Further” and “Higher”) and is the culmination of over a half-decade spent pushing the boundaries of big mountain snowboarding, adventure travel and mountaineering. It features striking imagery and, through excerpts from Jones’s personal travel journal, an introspective glimpse at the thoughts and passions that drive a man who has contributed countless chapters to the history of snowboarding. The included Blu-Ray extra features unseen footage from the filming of the trilogy.

“A major project such as the one Jeremy undertook offers such rich storytelling opportunities, and ‘No Words for the Way Down’ provides unseen details and an incredible side story to supplement the films,” says TGR co-founder Todd Jones. “It has been deeply moving to document my brother through all his hard work and dedication, and it has been an honor to have been able to support his adventurous spirit.”

The trilogy of snowboard films, each a two-year project, documents Jeremy Jones and his companions as they travel deeper into the backcountry, further into uninhabited mountain ranges, and higher up steep alpine terrain that, more often than not, has never been ridden. Jones, along with these films, has pushed the frontiers of snowboarding into new space, making way for future pioneers.

“We stand on the shoulders of the legends who came before us. They move the needle forward—they unlock the secrets and the unknowns,” says Jeremy Jones. “To not explore, to not evolve, to not seek out precious new ground would be a disservice to those who came before us, to those who showed us the way to the wild and raw places where life can be lived in its most pure and precious form.”

Beginning this week, TGR will publish online excerpts from Jones’s journal every Monday to provide readers a sampling of the book’s content. Jones will host a book signing at EVO Snowboard & Ski Shop in Seattle, Washington, on October 10.

“No Words for the Way Down” is available for sale at tetongravity.com and is proudly supported by Swatch, O’Neill, and Clif Bar.