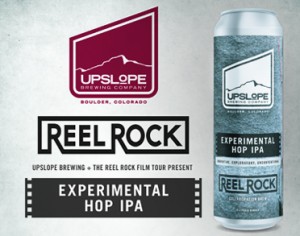 For the second-straight year, Upslope Brewing Company reveals its collaboration with the REEL ROCK Film Tour

For the past 11 years, the REEL ROCK Film Tour has defined the standard for climbing films with its annual offering of stunning action and compelling stories to audiences around the globe. REEL ROCK plans to raise the bar once again this year as it kicks off a worldwide tour with stops at over 450 locations across all seven continents.

This collaboration Experimental Hop IPA, available in 19.2-ounce limited release cans—and on draft in Upslope’s tap rooms—is brewed using a brand new hop variety, Idaho Experimental Hop #7. Hopped at over 3 pounds per barrel, this brew balances its pungent hop aroma with a light malt sweetness while boasting big notes of peach, apricot and a unique tea-like character. Pick a new line and savor this limited edition beer on your next adventure.

“’We’re thrilled to be partnering with the REEL ROCK Film Tour once again,” states Upslope Director of Sales and Marketing, Henry Wood. “It’s exciting to produce a limited release beer that coincides with inspiring events within the outdoor community and with a project that pairs so perfectly Upslope’s brand ethos.”

To celebrate this year’s edition of the REEL ROCK collaboration beer, Upslope will host a party at its Flatiron Park tap room from 5:00 p.m. to 9:00 p.m. on Tuesday, Aug 23, 2016. Attendees will be the first to try the Experimental Hop IPA and enter for the chance to score prizes from Skratch Labs, Nite Ize, Healthy Skoop, Alpine Start Foods, Moosejaw Mountaineering, Boulder Adventure Lodge, Boulder Rock Club, Crimp Chimps and SENDER Films. The first 25 guests after 5:00 pm will receive a free collaboration brew on draft.

View all Releases by Amanda