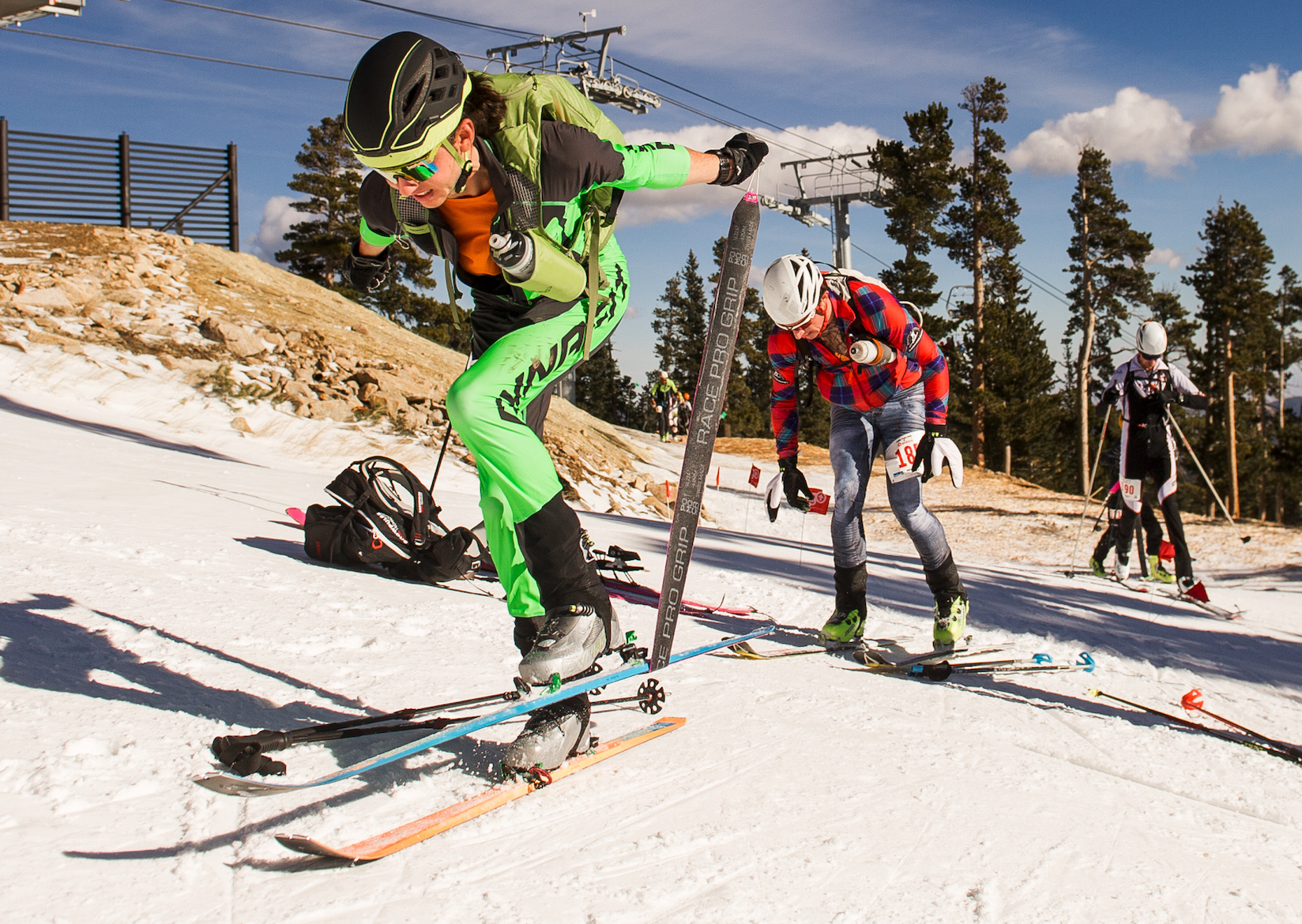 Popular in Europe but historically fringey in the states, Ski Mountaineering is ready to go mainstream.

(Summit County, Colorado) – “Ski Mountaineering is about more than just being a strong athlete,” says Ram Mikulas, president of the United States Ski Mountaineering Association. “You’re racing uphill, transitioning in a very technical way, and charging down the mountain on terrain that’s as hard as it comes on these little skis. You have to have an extreme attention to detail. Ultimately, though, it’s a really good time in the snow with a fun community cheering each other on. It’s something you grow into.”

It’s also a sport that’s just plain growing. The national team is starting to get respect from Europeans (where the sport has deeper roots), and this season will be the first Pan American Cup Series, with the first races held in the US at Colorado’s Arapaho Basin this weekend (the race will also be a US National Team Qualifier). U.S. resorts in general are beginning to more widely embrace uphill skiers with clubs, events, and even season passes. Oh, and it will be included in the 2020 Youth Olympic Games.

What is this special brand of fun?
If you’re a bit perplexed by ski mountaineering, here are the basics. It’s a competitive and recreational sport involving skiing up and down mountains, following a set course through challenging alpine terrain. It first appeared in the 1924 Winter Olympiad and continued as a demonstration sport for the next three Winter Olympiads. You’re familiar with the biathlon, right? It’s a predecessor of that. Today, recreational and competitive events are held throughout the United States in formats including Individual, Teams, Sprint, Vertical, and Relay.

Like any growing sport with Olympic aspirations, there needs to be a hub from which to organize and drive momentum. Enter the United States Ski Mountaineering Association (USSMA). The USSMA started in 2002 in Jackson Hole. Initially, it was focused on organizing races and getting more people involved, but when the International Olympic Committee (OIC) formally recognized the International Ski Mountaineering Federation (ISMF) in 2016 (a major first step in becoming an Olympic sport), the USSMA got serious. It brought on ski industry veteran Ram Mikulas as president, built a board of directors, and established official bylaws in compliance with the USOC.

“We have positioned ourselves as the national governing body of ski mountaineering, have a formal national team program, and will take athletes to the Olympics when that becomes a possibility,” says Mikulas.

It also established formal communication and committees to work with race organizers and sanction races. The USSMA currently has 27 people involved in a formal capacity whether on board or committee–and a great deal of momentum.

How Youth Will Grow the Sport
“We’re focusing on growing the sport in the US, and we want it to become an Olympic sport, too,” says Mikulas. “We’re most interested in the former, but we know that being in the Olympics will showcase the sport and increase awareness. So we’re really excited about that, and we feel that youth is the pipeline to grow the sport and achieve these goals.”

Youth programs are popping up around the country.  Summit Endurance Academy, in Breckenridge, CO and Silverfork Skimo, in Silverfork, UT are among largest and both have youth athletes training to qualify for the national team. “We hope and believe that as these programs mature even more that they’ll become a handbook of sorts for how to start a program and coach that others can follow,” says Mikulas.

What’s more, ski mountaineering will be in 2020 youth Olympic Games in Lausanne, Switzerland.

“The ISMF and IOC have worked closely together to establish a qualification process for nations to earn spots to go to these games. Each member nation can earn up to four spots, two male, and two female, born in 2002-2003. Currently, the U.S. has earned two spots, and our next opportunity is at Worlds in March where we’re confident that we can earn two more.”

The youth would build on the US National Team’s success at the 2017 World Cup where they placed sixth. The team will compete again this coming March.

“The A-basin races are ISMF sanctioned and will draw top racers from around the country,” says Mikulas.

Colorado has become one of the sport’s hotbeds, also boasting the largest regional ski mountaineering races, the COSMIC race series.

“A-basin and Eldora have been great supporters of the sport,” Mikulas says.

Utah also has a growing race scene as does New Hampshire and Vermont. “We’re starting to see it spread to the Pacific Northwest and California, too,” says Mikulas.

And with recent changes to the board, awareness should only grow.

“At our annual meeting last summer, we brought in new members to expand skill and knowledge sets around marketing,” says Mikulas. “We brought in Eric Henderson of Meteorite PR, and we have a committee with goals and objectives toward awareness and participation in the sport, financial stability, and membership growth.”

Join the Party
“The other cool thing is that, in general, the concept of skiing uphill is increasing in popularity. I was at A-basin at 6 a.m. on Thanksgiving, and I was with 100 other people skinning up–this is starting to happen at many resorts around the country. It’s like where snowboarding was in the early 1980s. We’re at a tipping point of awareness and demand, and the resorts are helping to increase popularity, the gear manufacturers are producing better, more accessible stuff at better prices. Big shout out to Eldora and their owners Powdr Corp as well as A-basin. It’s starting to happen all over the country.”